You know that faster, smoother, better, more - this is the MORE part.

Yesterday, a couple of people commented that you need to just do an armbar thousands of times in randori, and no, it's not that simple and BJJ people proved that.


Here is part of my opinion on it.

Actually, I thought Jorge's comment was funny and right on target. I have worked out with plenty of BJJ folks and so has Ronda and the schooling has been primarily in the other direction. It IS true that most judo folks aren't very good at matwork but what Rob is really saying is that most people who are not very good at matwork won't do very well in it, which, of course, makes sense, but that is true whether you do judo, BJJ or anything else.

I think what Jorge was saying is the trick is to do it thousands of times - and THAT is what most people in judo don't do.

Here is what I had planned to talk about today - thank you Rob and Jorge for the lead in !

To make your matwork automatic, you need to practice it thousands of times, and from both right and left side. Here is just a little example using my favorite armbar. This is a common position in a tournament if you have just been knocked down. You are on your butt or side and the opponent is attacking trying to follow up an advantage. Here is what you practice:
1. Grab his right wrist with your left hand.
2. Place your right foot above his knee and push.
3. As he stretches out, let go of the lapel grip you had with your right hand and grab his wrist. Now you have two hands on his one arm.
4.Throw your left leg over his arm. 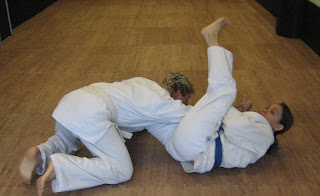 5. Push down with your leg on his elbow at the same time that you are pulling up with both hands. 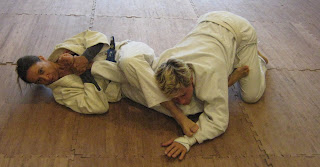 Repeat this thousands of times.

Now do it again on the left side.
Notice how I'm originally somewhat curled up as my left leg is bent, with my foot above his right knee. 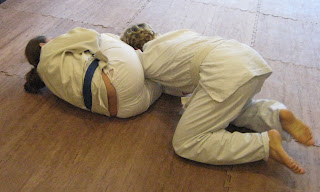 As, like Jorge said (what? you didn't read the comments?), I stretch out everything, my leg, my body, Peter's arm goes straight. Once again, I have two hands on Peter's one arm, my leg pushes down, I pull up with both hands and that's a submission. 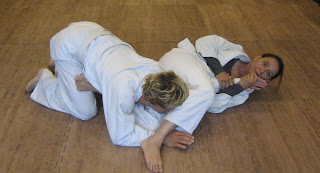 What happens if he tries to escape?

If someone tries to escape, they'll most likely do it by trying to twist the arm.  If he twists toward me, I'm going to lock the arm against my body and arch my hips.

If he tries to do a forward roll or flip to get out of it, I'm going to hang on to his arm, lock it against my body and roll with him, ending up in the position that was demonstrated in yesterday's blog.

I'm often amused when I teach matwork by the number of people in judo and jiu-jitsu who tell me "this will never work". "This" could be referring to any number of techniques. I am amused because, of course, those techniques worked very well for me in a great many matches and now they're working for my daughter.

What is the secret of getting your matwork to work? Do more of it. Do thousands of repetitions, do them as nearly perfect as you can make them and from every possible situation. Notice that I just covered three different situations - I get the first armbar attempt, he twists and I get the armbar, or he tries a roll and I get the armbar.