June 5 Gi & No - Gi Grappling at Hayastan or Why Can't Technology Meet Judo? 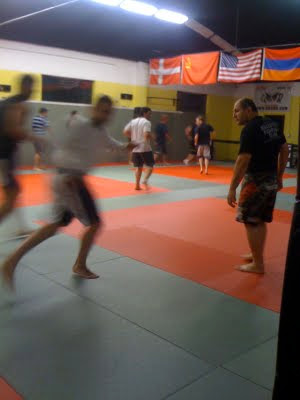 I really like Gene LeBell and Gokor Chivichyan. They are two really nice guys. However, even with that said, I have to admit that they are not the first to spring to mind when I think of technology. Gene was a bad ass judo player back in the 1950s but since then he has made his living being thrown through doors and falling off of motorcycles as a stunt man. Gokor used to beat up people and now he teaches other people to beat up people.

They are having a tournament this weekend, Gi and No-Gi grappling. The Gi part is pretty much judo without all the rules against grabbing the legs, with no penalties for not saying "Mother may I" before taking a grip and stuff like that. Anyone who has an interest in freestyle judo will love it.
Ronda is there to coach the players from the West Coast Judo Training Center, but if you are a judo player and confused, just go up to her and ask her any questions. I'm sure she'll be happy to help you out.

None of that is my point. My point is that THEY have a website where you can register and pay on line with a credit card or Paypal. Why the heck don't judo tournaments have that? I know sometimes state or national competitions do, but this is a "Drop by on Sunday and fight tournament".

For YEARS, I have been suggesting that we make judo tournaments easier to register and compete in, that you not have to get up at Dark o'clock in the morning to register and weigh-in.

This tournament gives you three options - pay on-line, download and print the form and mail in a check (sorry, too late for that now) and pay in cash on the day of the event.

They give you two options to weigh in - you can drop by the day before if you live in the area and weigh between 11 and 1 or, if you live further away and don't want to drive in twice, you can come weigh in between 8 and 10 on Sunday.

This just seems so simple and obvious - pay online if you want, download the form and mail it in if you want, weigh-in the day before or the morning of the tournament, whichever is easier for you. In short, make it easy for people to register, pay and weigh.

When I went to the 2010 Freestyle Grand Slam tournament hosted by Mike Darter and http://www.okcdt.com, they did indeed have online payment for the tournament set up. Hopefully, responsible use of technology will become more prevalent in the years to come.

This actually relates to a blog post that I am working on about what *I* think National Judo Organizations should be doing for their members. Providing things like web site templates built for Judo clubs and technology tools for tournaments, payments, and such fit on my list. Nevermind that a stamp collection is one of the most prominent things on the USJA web site (I like Dr. Charles, too... but do we really need to pimp his stamp collection? We're working with Sensei Goltz to overhaul that site, too), I think it is do-able.

Kurt - now Mike IS someone who springs to mind when I think of technology, so that doesn't surprise me