It was the first time the Panamerican Games had a women’s judo division. I can’t speak for the rest of the competitors, but I know I was nervous. I’d had a good run, won a lot of tournaments lately but that only made it worse. When I told Dr. James Wooley, the team manager and a two-time Olympian that I was stressed because no matter how much I trained I knew that there was a possibility I could still make a mistake in a match. He laughed at me and said,


“You’re thinking about it all wrong. You don’t have to be perfect to win this tournament  You don’t need to never make a mistake. You just need to go out there and in each match make one less mistake than the other person.”

How to do armbars without a mistake 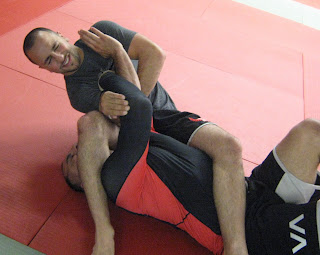 LOCK THE ARM AGAINST YOUR BODY! 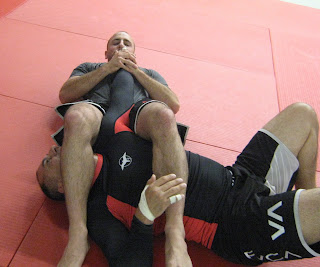 Karo has perfect form as he has no space between his body and Rob's arm.

When you are in the position above arch your hips, either the person will give up or the elbow will dislocate.

I'd just like to point out here that although these two gentlemen are at grappling practice, the technique they are demonstrating is EXACTLY the judo technique, juji gatame, with no modification whatsoever. Karo is, in fact, a judo black belt.

P.S. Rob, who is also a judo player, wanted me to point out that he in fact LET Karo get him in the armbar just so I could get good pictures and there is no possibility that does not involve shackles, snipers and a troop of little boy scouts in which Karo could actually get him into a position where he would be required to tap out.

P.P.S. Thanks to both of you for taking a few minutes away from practice to pose for pictures.
Posted by Dr. AnnMaria at 12:55 AM

One of the biggest problems I see in Judo - and I'm guilty of it - it working the armbar, but not the ways to get there.

How to get to an armbar? First you choose which arm you want to armbar. Second you pull the arm while stretching everything else. Third the opponent taps on the floor. Now practice it 1000 times from any position during randori and the armbars happen naturally.

Jorge, the BJJ people have already shown us there's a lot more too it than that. Most Judo folks I know will get schooled on the ground by a BJJ player of comparable skill.

Fair enough. I really have no knowledge of BJJ and how many ways they get into an armbar. At the same time each person only has 2 arms and I personally can only armbar one at a time.
In all clubs that I have trained, we practiced a good amount of entries to armbars from standing and from the ground. How many types of entries are enough? I have no idea... this may go into the discussion of how many techniques should someone know and be able to throw someone in a competition and how many techniques are too many that the player is unable to effectively use them because of too little practice in each one.

Actually, I thought Jorge's comment was funny and right on target. I have worked out with plenty of BJJ folks and so has Ronda and the schooling has been primarily in the other direction. It IS true that most judo folks aren't very good at matwork but what you're really saying is that most people who are not very good at matwork won't deal well in it, which, of course, makes sense.

I think what Jorge was saying is the trick is to do it thousands of times - and THAT is what most people in judo don't do.

I don't know about BJJers, but I've fought some Brazilians who were better than me at groundwork. This was surprising to me; of my wins, more than 50% of them are on the ground.

I think I pinned a Brazilian at Rendez-Vous Canada in 2009 though.

I agree with Jorge. There isn't really that much more to getting armbars.