If you want better matwork our training should have a PLAN and you should follow that PLAN. Think this is obvious? As a public service, the next few blog posts will point out common mistakes seen in competition, ending the week with recommendations for how to fix these.

Watch a tournament and see how often you see this:

Hesitation
A player throws and there is a second or two from the throw until following up to the mat. In that second, the opponent turns on his or her stomach, rolls to the side or sits up. All of these split-second moves put the opponent now into a little better position. Why didn’t the player who threw IMMEDIATELY follow up to the ground?

Look at the players below. They are in a beginning class and just learning to do throws and hold- downs. 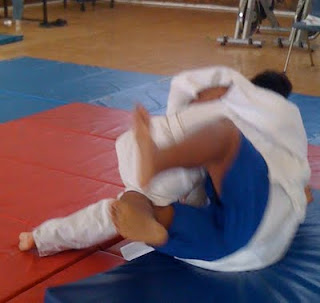 They are practicing a drill where one person throws and then goes into a pin the second they hit the mat. The student has just thrown and he already has the opponent's right arm locked under his left arm for the pin. He didn't need to move his right arm because it was in the right position for the pin when he came into the throw. Unfortunately, this is NOT the way most people learn matwork from the very beginning, which is why they make mistakes later on.

If you throw into a pin, judges are more likely to just award a full point than wait out the time for the pin as well.

If you throw into a pin you tend to concentrate better on clean throws as well.

I'm obviously a strong believer in this philosophy.

Turn all your throws into makikomis.

Hurray! Makikomi -ists unite! I'm with you on that Jorge - except for the tomoe nage armbar We need to keep that one.