Note: This week, to free up my time to get another chapter done on the book, I have several guest posts from co-author, Jim Pedro, Sr. 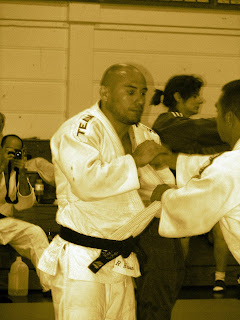 Remember the best conditioning for a sport is doing that sport. Unless you’re a professional or doing college sports, you don’t get enough mat time. For instance in Japan, they do five or six hours a day of judo, very little wight lifting they build their strength and endurance by doing their sport. They do some lifting and some conditioning but not very much. When you’re working out at home, you’re probably only working out mat time five or six hours a week compared to their five or six hours a day. Not only are they training on the mat far more hours than you, they have more quality athletes to train with.

Looking at it logically, you would say that you don’t have a chance to catch these athletes. But if you supplement your training with lifting, running, circuit training and try to out condition everyone that you fight, you have a chance. Those things you control. I recommend you get a tape by Dan Gable that I listened to years ago where he said everyone has a breaking point and he would stay on him until he broke them and beat them. 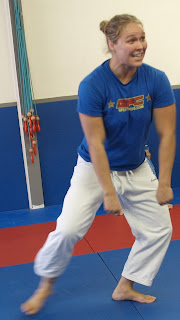 It’s difficult to do, but not impossible, look at the results that we’ve had with some of our players.

As a coach, most of the happiest moments of coaching have been after one of my athletes beat an athlete and they’re fresh and the other athlete is totally exhausted. This all comes down to how bad do you want to win.

(I could not actually find a picture of Jim looking happy so I included a photo of Ronda doing her happy dance at practice at the West Coast Judo Training Center instead. This is the dance she does when people do whatever she's teaching just right. By the way, Ronda and Sensei Blinky are running practice on Sunday, if you want to show up. Maybe you'll get to see her do her happy dance.)
Posted by Dr. AnnMaria at 8:17 PM

We are saving it for blackmail purposes after her MMA career gets really huge.

I do believe someone has a video.

I agree that conditioning plays a huge role in results on the mat,if you cannot breathe there is no way you are going to execute a technique that requires explosiveness,power,timing,etc.