What Judo Statistics Would You Collect

Chuck Wall of Fredericksburg Judo Club (also known as Wall 2 Wall Martial Arts, and a great place, check it out) asked this question,

"As a competitor or club owner, what do you think that most important stats should be for me?"

Never one to let any work go to waste, I thought I would post my answer here as well


As club owner these are some of the statistics I think are important: 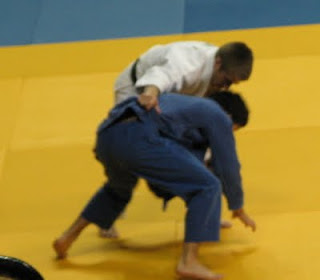 (Thanks to Jerry Hays, USJF Archivist, for the photo above from the U.S. Olympic Trials )

As competitor, or someone analyzing a competitor's performance, I think these are important
The above aren't all of the statistics that might be important, but I think these would be a very good start.
Posted by Dr. AnnMaria at 6:36 PM

Email ThisBlogThis!Share to TwitterShare to FacebookShare to Pinterest
Labels: statistics

Regarding students in the dojo I would agree that how they heard about your dojo is a big key as well as how many of them are paying students. Knowing how they heard of you helps you determine which marketing strategies are working the best.

The coach should also have the statistics about the whole team for the wins and losses of their students on tournaments. It would be good to see which kind of techniques people from a club are most vulnerable and which kind of judo is the strongest. The club where I started practicing judo, did not teach counters to young people until very late and we would all loose against opponents that would base their judo on counters. Then my coaches started to teach how to counter counters and during that year, we won a lot of fights like that. These words would make much more sense if I had some statistics of it. The point is that this kind of changing of teaching habits might occur much faster if statistics are kept by coaches for the whole team.

That's a good point, Jorge, that the type of statistics a COACH should examine is more than what an individual ciompetior looks at

So, as both a statistician and a judo coach, do you keep these (or any other) stats on your dojo/competitors? And have you read Moneyball? If not, it was partially about mining data to find what baseball stats were best correlated with success. Are there any "moneyball"-type stats in Judo that are underappreciated, but very useful? Any stats that you wish we had, but just aren't available? And for that matter... what stats *are* available? Someone here, in Europe/Japan/etc must do a good job of keeping judo stats...

Someone gave me Moneyball but it is in a stack of books that includes textbooks to review for the statistics course I'm teaching this fall, so it is on the bottom.

When Ronda was competing in judo, I did keep track of the number of different techniques she used to win international matches. As a competitor, I kept track of most of the stats I mentioned for myself and Ronda had a book she kept for herself that includes most of the statistics I mentioned.

The West Coast Judo Training Center had a manager for a long time that kept records. She hasn't been around lately. I need to track her down. (Yes, Yazmin, I'm talking about YOU.)