Why Do Some Judo Programs Have Students and Others Don't? 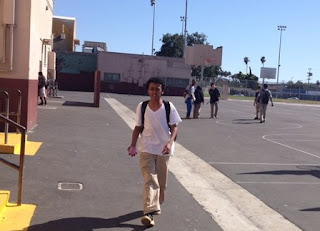 Look closely in the picture above. See the kids in the background? See the one against the wall? All of those kids, the one walking towards me, too, and more  you can't see outside of the picture are waiting outside for the gym to open when I get to Gompers Middle School. They're waiting for judo class.

Why do some programs have trouble getting five kids on the mat and others have students literally lined up outside the door?

There are probably lots of reasons but I can tell you three things that I do that I think make a difference.

1. I have a plan for the day. I don't wing it. Every day, when I come in I know what we are going to do first, second, middle and last. I might change my mind during the class, for example, if it seems as if students are having a hard time learning a technique we will work longer on it, instead of introducing a second new technique.

2. I have an overall plan. In general, we start with conditioning. Jim Pedro, Sr. gave me this idea about circuits at the beginning of the year and we have been doing these, on the average, three out of four practices. We've gone from two minutes of circuits to seven. The reason I like this is it is measurable and noticeable. Every kid has gotten better. It's like Jim said, if they do it, they WILL get stronger. Kids who couldn't do five push-ups in October can now do 60. Not only do I want them to get in better physical shape, my number one concern, but I also want them to learn standing technique, mat technique, get over any fears they might have about falling or attacking, learn conditioning, be aggressive without being mean, develop coordination and learn transition. I also want them to have fun. Everything we do is aimed at one of those objectives. My plan also calls for people getting better technically, so we begin the year learning basic throws and gradually move to combinations, for example.

3. I try to have a combination of predictability and variety. Predictability can be good. People like to feel like they know what is going on. Plus, if you have been coming to class regularly and I say we are going to do circuits, or we are going to do that exercise with the medicine ball where everyone is running, the students who get set to do it can see that they have learned something because the new students are just looking around. We do some of the same throws or mat techniques most practices and then I will teach a new one. I think most judo instructors, most of whom never had any other teaching experience, either try to teach too much in one day or are too repetitive and teach the same thing over and over. While I really like matwork and try to teach about 50% matwork each practice, it seemed to me that the students were somewhat better in matwork than standing, so we did all standing instruction today, although they each did about six rounds of mat work, as well as four rounds of free practice.
============================
Random Ad

Buy my book and learn all kinds of cool stuff about coaching and teaching.

This is a great point. I train Brazilian jiu-jitsu & judo in a very informal setting; however, our main instructor is self-employed and on the road an awful lot, so for the first 6 months everything was very unorganized. People would come to class and only myself and another blue belt would be there to train. Most of the time, we would just end up doing some random drills and then sparring. It wasn't until our coach entrusted us to actually do structured, planned-out practices that people started coming and sticking around. I believe that predictability - a definite structure - can be something that attracts students like magic. Being unorganized and unpredictable equates to instability and is no good for business, or for training.