Why You Lose (and other things you don't want to hear)

Sometimes you look at a scene and it brings a lot of things into focus. I had one of those moments of clarity this weekend, and it was thanks to a photo one of the parents snapped during practice this weekend (thank you, Dan McNair a.k.a. Eileen & Liam's dad).

To win, you don't need to be bitten by a radioactive spider, born on a far-away planet, to fund a multi-million dollar secret lair. I blame comic books. Even Batman, the one super-hero who did it through training, had millions of dollars to spend on special super-hero stuff. 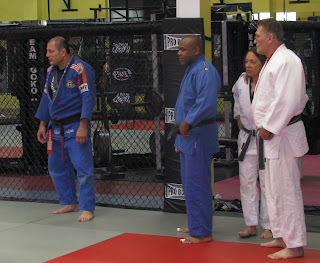 I was at practice with these guys, plus someone I just met Zurab Bekochvili (world sambo champion - watch one of his matches here, the dude has some sick arm bars).

To be a world champion you need to balance on the line between arrogance and humility.

Given those four things, you can win.

This is why I roll my eyes when I CONSTANTLY hear young people say one of these things:

There is no secret sauce, no magic bullet. If moving from Point A to Point B convinces you that you can win, then good for you. However, as I stood in a gym with people who had won world titles in two different sports, who had been on the national judo team for two different countries, it was very hard for me to buy the bullshit I hear from people about "there is no one here good enough to teach me".

If your coach - whoever he or she might be - is discouraging you from training in other places with other people, deep down that coach does NOT have your best interests at heart. Maybe one person might be a jerk or pedophile and you shouldn't train there - but everyone? Your coach is the sole holder of all judo/ mixed martial arts/ jiu-jitsu knowledge. I don't fucking think so.

How do you know? You weren't even born then. Yes, there are differences and maybe you are correct (maybe not) but my point is that most people who say that have no fucking idea how judo was 20 or 30 years ago and are just repeating something they heard or throwing out an argument to justify not going to practice.

The main reason that you're not winning is that you are lying to yourself.

There were days when I was in graduate school at the University of Minnesota when I would roller-blade around Lake Calhoun.  That's seven miles if you do it twice around. You know what I said on those days? Not, I roller bladed seven miles or I worked out or I lost three pounds. No, I said,


... because roller-blading seven miles is in no way the equivalent of working out for two hours with a bunch of guys who want to smash me in the mat. Because I was honest about it, I made damn sure that the next day, I didn't skip practice. Then, I moved from Minnesota to southern California, and when I got here, there I was.

Many of the regulars at WCJTC have become better by spending only $10/kid for 4 hours of hard practice instead of going to smaller Judo/BJJtournaments in Southern California. You would get a lot of agreement from many of the WCJTC parents that a $10 four hour practice is worth at least 5 Judo/BJJ tournaments. You get a lot of instruction and mat time with other competitors from other Judo/BJJ schools. At some tournaments you may have only one other competitor and/or you are one and done in a BJJ tournament and spent $50 or so and all you have to show for it is a t-shirt and a medal. $50 = 5 practices at WCJTC = 20 hours. How many minutes did your kid spend on the mat at their last tournament? Less than 15 minutes, huh? Be honest with yourself. You just wasted good money when you could have gone to WCJTC for a fraction of the cost AND gained more in return.

I'd urge you to bring your kid(s) to practice, but I can't make you go because it really is up to you and as AnnMaria-sensei wrote above "wherever you go, there you are."

For those if you who live in Southern California, you have over a month to come up with excuses NOT to practice at WCJTC. Here's the schedule for April/May:

I'm new, here. I happened upon your site, through the transitory nature of the net; via the world of MMA (I'm often intrigued by things I cannot do, myself!); via Ronda Rousey - whom I believe you have an endearing -or enduring affiliation with (depending on the lighting, and how you feel, on the day!) Actually, I was in another browser, and I could the applause coming from this one...I just had to come in!).

You see, over some months, now, I could occasionally be heard chuckling at your veiled-acerbity, and your so often amusing, frequently omniscient, and invariably enlightening ripostes to your brethren, here....Priceless! (No, really; I saw no one as I entered, thinking; 'What - no door-charge for this?

It's a poor day when I don't learn, or I'm not fed at least something about something; and betwixt you and your followers, here - with an even distribution of arrogance, humility, wit and good humour - I never seem to leave hungry.
So much of what I've read here, by way of discourse and advice from you all, can be applied to, and will often fall under; the broader umbrella of life its' self (something I'm sure isn't lost on your readers).

And so, because I believe you have the ability to tell me to f***-off - and have me actually anticipate the trip (though I'm sure you never would); I'll tentatively refrain (as a new student might) from comment, today.
Besides, you're like lieutenant Columbo; you're too clever; and after your umpteenth knocking, and re-entering of the blog-room; you'd inevitably tell me how I put the poison in the coffee, anyway.

Suffice to say that I'm always willing to 'travel' to another site (even if transitionally) to learn something new, because, you see, wherever I go, there I am.

Thank you, for the many past blogs, and the ones we haven't read yet.
AnnMaria.

Good write. A lot of swearing though? As I you didn't believe in your point would not cut it without? Don't worry, you're true.

I think it's important to not discount Tinytown, USA. Judo Quebec started a program to help support athletes moving from Tinytown, QC to Montreal, because there are definitely more resources in Montreal. Certainly from LA/NY/SF the resources are there.

There's another point, though. People do things that are easy, so it is useful to make it easy to do the right thing. When I was in Berkeley, I tried to go to San Jose sometimes, but it was just very painful (2 hours on transit each way), so I didn't go as often as I would've if I had been, say, at Stanford. No use making things harder than they have to be. Also why I don't keep ice cream around the house.

Question: Did they have roller blades where you were in grad school?

Well, Gene, you are welcome!

Hey anonymous1 - Yes, they DID have rollerblades when I was in graduate school (smartass!) although to be honest I have to admit that this was a new invention.

Anonymous2 -
In all honesty, with the swearing, I have found that when I am nice and polite too many people don't get it nor pay attention. Sad, but true.

Keep up the language Dr. D. You wouldn't be you without it and it's one of your more endearing and amusing attributes! Hey, how 'bout in Spanish? I'm always looking for new words to communicate with the 'vatos'.

Not sure if my posts took, Dr. D. It didn't indicate whether or not I typed the robot prover stuff in right. Oh well...I still appreciate your comments and I agree with Gene.

One thing I have to comment about is that whenever I'm in a new place training with different people, I don't feel "off-kilter". I'm very comfortable with the unfamiliar and the next challenge actually excites me. I know that if I play the game perfectly, winning takes care of itself. Thus, I focus more on being observant, even within combat and always thinking ahead. I'm confident that I can adapt to the unfamiliar and that I can trust my instincts to react properly, even if I've never practiced for something before. In other words, rise to the occasion. I challenge myself with the goal of making this innate ability to rise to occasion more accurate first and to get familiar with new techniques second. I always look to copy a technique or strategy that my opponent used on me. I believe that victory is not enough; I must always take a bit of my opponent's power with me as well.