A look at celebrity 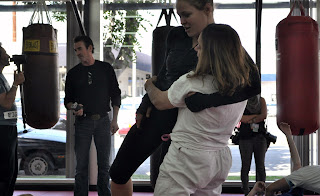 Take a look at this picture. It was just Ronda and I goofing around waiting for a clinic to start. Notice something?

There are three cameras in this picture. The guy to the left who is taping for a documentary. The guy next to him who is recording an interview. The woman on the right who is a photographer for a newspaper. There was also a fourth person with a camera who took this picture.

Some people say that I always stand up for Ronda, as if that's a bad thing. Well, I do. In part, it is because family comes first and I am always on the side of my family, no matter what.

Also, I have learned to have a little more understanding for celebrities. Yes, people who live in homes by the beach and make a seven-figure income don't generate too much pity.

However, think about yourself. If your life was scrutinized from all angles seven days a week, how likely is it that you would NEVER say something that makes you sound unkind, uneducated or untruthful, particularly if it was taken out of context? I'll bet most people regularly say things and then say, "No, wait, I didn't mean it like that, what I meant was ---" or later realize what they said wasn't worded the best way.

If it is most people, though, no one remembers if five minutes later, and everyone goes on with whatever they were doing.

My suggestion for the day is that next time you read something in the tabloids or hear it on some celebrity gossip show, compare it to the dumbest thing you've said this month and just be glad no one was around to film you. 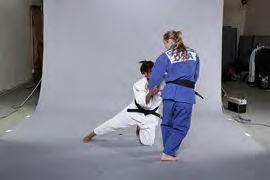 What did Ronda say this time?

There is a reason why I don't bother reading gossip mags. (or at least try to avoid it - it's all over the net these days).

Most stuff is reported out of context (when not outright twisted), to create controversy, and when you have a lot of footage and audio, it's easy to pick and chose.

Ha ha, no, I swear she didn't say anything! It was just coming across the photo with all of those people with cameras made me think of this.

Dear Dr. Ann Maria: I'm a middle aged female with a blue belt in jiu jitsu and just got word that I'm going to need a partial knee replacement. Do you think it will still be possible for me to roll?

Oh absolutely! I had a total knee replacement and I can do things I haven't been able to do since I was a teenager. Three pieces of advice though: 1.Take as much time off as they tell you.
2. Do the physical therapy RELIGIOUSLY. Don't try to do more and aggravate the joint and don't do less. It really helps.
3. Realize that it will continue to get better for a long time after the surgery, literally for months, if you regularly exercise as your doctor and therapist recommend you will continue to improve.

I have always been one to love fortune, but shun fame for this reason. I would get into a lot of trouble for being controversial because when you're a celebrity, you're not allowed to say anything that could be offensive because.... well, I'm not really sure why. I guess it was to nip the "problem" of another Jim Morrison and similar personalities from breaking down barriers? I would get fired from the UFC the day I got hired due to the things I tend to say that are interesting and thought provoking, yet "unprofessional." Where is there a correlation between the ability to do a quality job with honesty, integrity, and an unyielding commitment to excellence and having the same beliefs as the status quo? Still haven't found the answer to that. I've always thought that mavericks of society would make for better employees because being accustomed to being outside of the status quo makes them more predisposed to going above and beyond the average.

Also, why do the wrong people get blamed? For example, when Ronda posted that "Sandy Hook Conspiracy" video, why was she blamed and not the people who produced the video?

Dear Dr. Ann Maria: Thank you for the advice about my knee replacements (I'll need to do both knees). I've had a hard time reading about people's experience getting this surgery yet continuing to do jiu jitsu or judo. I'm so encouraged to hear you've had the surgery and are still able to do judo. I take it leg locks will be a no no for me as well as butterfly guard after the replacements are done? I know they don't want twisty motions or heavy weight put on the knees so the parts don't separate. Would love to hear more if you do any blogs about rolling with knee problems, surgeries, replacements. I train at Gracie Academy Torrance and they seem to be more sensitive to people with surgeries etc. Thanks for the advice!