My friends, Steve and Becky Scott of Welcome Mat Judo in Kansas City are two of the coolest people you'll ever meet and I have had some very memorable discussions with them. One of those was about superheroes.

Every superhero had something special - Spiderman got bitten by a radioactive spider. Superman was born on another planet. Batman had a billion dollars to build a secret lair. People are waiting to get hit by the blue light that makes them a winner.


Here is the bad news, young people. There is no blue light or radioactive spider. There's just you. 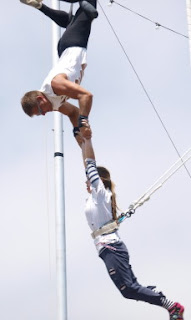 I'm going to buy Chael Sonnen's book and read it for the sole reason that it contains this quote.

An old wrestling coach of mine once told me something brilliant, and it applies to every fight I've won and, sadly, every fight that I've lost: "Chael, you can tell when a guy breaks." And you can, even (nay, especially) when it's you.


That is totally true. I've NEVER lost a fight because I've given up, and as a result, I've lost very, very few fights. I've beaten plenty of people who had better technique, better coaching, were better liked by the crowd and the referees, had more international experience, more training partners, better training facilities, were bigger, stronger, faster. In short, I've won lots of matches that I should have lost.

One reason many of those people lost is that they just didn't care about winning as much as I did. That doesn't make them lazy or cowards. It just makes them different from me. My lovely daughter, Julia, didn't care that much about winning in judo but she loves doing stunts on the trapeze, which you couldn't get me to do for a million dollars. I'm afraid of heights.

If you DO care about winning down to your soul, your odds of winning are dramatically greater. As my friend, Bruce Toups says,


Fighting is hard. It hurts sometimes and it requires your 100% undivided attention. You can't be wondering what the crowd, your coach or your friends are thinking of your performance. You can't worry about that stupid mistake you made in the first minute of the match.  You can't, in the middle of a match, think, even subconsciously, that this is too hard, it hurts and why the hell are you doing this.

After all of that training, though, in the middle of the match, you need to have that voice screaming in your head and your heart

You are NOT going to beat me!


It's there. Believe me, it's there if you care enough to listen.


Shameless ad - Buy our book, Winning on the Ground

I'll have to politely disagree with some of what you say here. While I'm not one to wait for a "blue light", I have had fights for my life, more than once outnumbered 20-1 (even you, Ronda and Chael Sonnen can't make the claim to have survived an encounter that in tact, especially if you're educated on the realities of what can happen to in a street survival situation) and unlike some of my opponents, I had no weapons on hand. It's like something just "took over" to save me. I knew I was moving, I saw myself moving, I felt everything, but my mind wasn't connected to it. It was just pure sensory with no awareness within the experience. I do agree that there's only you and that's enough. However, there's a lot more to "you" than one might think.

I really like this post. I automatically think about what separates Michael Jordan and Kobe Bryant from other b-ball players who are just as athletically gifted and skilled. I will remember this, in regards to my son. He's 4 years old, and just started Taekwondo. My lil guy is super-competitive, but well...he's four. Lol. Win or lose, what i want for him is to not give up when things get tough. We'll see!

Anonymous -
You underestimate me. I did not grow up in Santa Monica and I have been in street fights, though I cannot claim to have been outnumbered 20 to 1. And I completely agree with everything you just said.

I'm not underestimating you, as my comment never specifically designated anything about regarding your competence on the street. I apologize if I came across that way. However, it should be self-evident that if someone is outnumbered 20-1, it's not a normal street fight. 20 people on 1 with several having weapons means that it's gang related violence. Not all fights which happen on the street are crime survival situations nor are they necessarily life threatening. Higher probability, yes. But fighting someone who's angry at you is much different than fighting 20 ruthless thugs that want to kill you. Also, I wasn't bragging as much as I was providing my reasons for believing in a "superhero" element in me. It's not comic books, it's experience. There isn't a man alive that I know of who can take on 20 thugs, several of them armed with nasty improvised weapons like "smileys" (padlock on a bike chain) and leave the alteration completely unscathed. I don't care if it's Anderson Silva, they'd take at least one hit. I left it without so much as redness on my face. I don't know what happened or what it was that took over, but it's got to be inside of me somewhere.

I enjoy reading your blog. Determination goes a long way when determining a winner. Winners are simply willing to do what losers, wont. You embody that fighting essence.
OSU.
Jonathan

The World Around Me said...

I really like this post. It was very inspirational. The fact that you wrote about spiderman got me intrigued, but the words of encouragement kept me here.

In some circles of fighting, the "Blue Light" you speak of is an absolute necessity. So necessary that it's not only the first order of training is to access that "Blue Light" at will but that no further training can be pursued without it. Try putting any higher caliber UFC fighter in those circles and it'll be like feeding them to the lions. This "blue light" is the animalistic ferver innate to all of us. The people who know how to access it are not accessing what they've learned in their lifetime, but what the human brain itself has learned, even before it was a human brain.

Um, maybe. I'm still betting my money on the person who trained the most, blue light or no.