The Restaurant of Disgusting Things 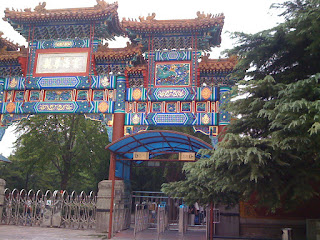 China has beautiful architecture and art. Too bad you can't eat it.

During my junior year of college, I was a foreign exchange student in Japan, living with the wonderful Saito family in Nerima-ku while I attended Waseda University. Mr. Saito told me one day, in the context of talking about how terrific his wife was (did I mention they were a wonderful family?) that there is a Japanese saying that the best houses are American, the best food is Chinese and the best wives are Japanese.

All I can say is that Mr. Saito must have gone to a different country than the one I visited which was also coincidentally named China. We did eat at a couple of good restaurants, both owned by the kind gentleman who hosted our group in China. In a lapse in judgment, we decided to explore our environment and branch out to random Chinese eating establishments. This adventure, which was entirely my fault, made clear to us all why there are so few fat Chinese people.

I am a big believer in experiencing the culture wherever you go, and not eating just at McDonald’s and Dunkin’ Doughnuts every day while you are in Beijing. Thus, Ronda, Jim and I ended up in a restaurant with me pointing at random things on the menu. After trying several of the dishes, Ronda commented,

“I don’t know how to read Chinese but I am going for the translation of that sign out there as being ‘House of Disgusting Things to Eat’”.

The rice and something that the waitress suggested that tasted like orange chicken were both pretty good. It actually was chicken, too, according to our waitress.

Let me try to describe the rest of it. There was this mess of green stuff that looked like kiwi, had the texture of cactus leaves, which I actually like to eat and recommend as low in calories. Unfortunately, the cactus resemblance did not extend to taste. Did you ever try chewing on a blade of grass as a kid? Imagine if someone took a bowl of that grass, cut it into leaf shapes, poured maple syrup on it and threw in a tablespoonful of dish soap.

Ronda took one bite and asked,

“You didn’t actually pay money for this, did you?”

Ever the optimist, I suggested,

“Maybe you are supposed to just eat part of it, you know, like artichokes, where you scrape off the top part of the leaves.”

I tried it, without success. There was no part of it that was edible in the usual definition of the word.

When they brought the next plate out, Jim Pedro pushed himself back from the table and exclaimed, aghast,

“What the Christ! AnnMaria, when I got up to get a beer did you order a plate of koala’s balls?”

How convenient. For the record, the plate of small, light brown round things was not koala’s balls, or, at least, I don’t think so. They tasted more like pinto beans soaked in lye. When I assured her they were most probably vegetarian, Ronda tasted a spoonful and promptly announced,

The next plate of things was something I thought from the picture in the menu would be eel, which I happen to like. Ronda and Jim took one look at the plate of grey, slimy stuff the waitress laid on the table, both of them just laughed and shook their heads saying,

Me, being the food adventurer, had to choke down a piece. I wish I had gotten the name of this dish so I could recommend that you not try it. By the taste and texture, my best guess is that it was the intestine of some barnyard animal left in a vat of snails to be crawled on over night to provide flavoring and extra moisture.

Hot tip: If you are in China and they bring you a plate of something grayish with white streaks, slimy and resembling tossed flatworms – don’t feel the obligation to taste it. You aren’t missing a damn thing.

The fruit salad was good, and had recognizable fruits in it. Even the unrecognizable ones tasted good. Ronda wouldn’t eat it, though, because she was convinced the sauce had egg or milk in it because it was white. Apparently vegans have a color-coding system. Who knew? I pointed out that tofu was white but she responded that I had lost all credibility in the food category with the plate of flatworms.

“Now you know why I had beer for lunch. Here, have a glass.”

The beer was pretty good, and I don’t usually even drink beer.

As we left the Disgusting Things Specialty Restaurant, it occurred to me that the only things I really liked so far were beer and rice. If I lived in China, I would have to become either an anorexic or an alcoholic.
Posted by Dr. AnnMaria at 10:08 PM

Yannow, if this consulting doesn't work out for you, you should really consider a career as a food critic. I'm sure your lurid descriptions don't quite do the, uh, "cuisine" justice, but they sure do paint a pretty good picture.

BTW, when you finish the Zebra Judo series, is there any chance you will do a DVD with all the lessons?

My kids really love it.

HAHHAHAH mom this is the funniest post you've written in a while!!

You must have gone to a different China than I did ... if I lived there I would weigh 800 pounds ... as long as the diarrhea did not kill me first!

Probably ... you should have gone out with someone local and Chinese ... like I usually do.

Ordering veg in China is possible ... but you really need a good translator. The concept is foreign to most folks there literally, a foreign affectation. Why ignore good and tasty food ... eat everything but the oink!

Hi Ann,
Congratulation to you and your daughter on her bronze at the 2008 Olympics.