The biggest mistakes in matwork?

I've been writing and deleting paragraphs in the groundwork section of THE BOOK (Building martial arts champions from the ground up ) as I have an argument with myself. I can't decide if I think there are two or three major mistakes in matwork.

Of course there are an enormous number of mistakes that people can make. I do think, though, that there are two or three that overshadow all others.

These two are definitely at the top:

So, those are definitely in my top two.  Improving on those two aspects would make anyone's ground game over 100% better.

There is a third mistake which is not having an attack from every position. I'm debating with myself over that is as serious a mistake as the other two. Let's get this straight - if the only mat moves you have that succeed are from one position, say, when the other person is on all fours and you are standing in front - then the truth is that your matwork sucks and I don't care what your coach, dad and your girlfriend tell you. If you have good transition from standing to matwork and a few good matwork combinations, you can still get by okay if you only have successful attacks from two or three positions instead of eight. But, that's just being okay.

I'd call Jim & ask his opinion but it's late on the east coast and tomorrow morning I have to be up early to give a couple of guest lectures on statistics to middle school students in downtown LA.

So .... if anyone has any thoughts on this, please jump in. 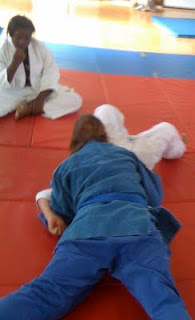 It is important to be able to play the game from every position. Not just attacking with submissions, but also be able to Defend against submissions, and to be able to recover from a bad position. Even though some of the positions may not be a strong point for you, your putting the odd's in your favor by working on attacks and defense from different positions you get in when your on the ground.

One of the things I think is most stupid is starting matwork randori face-to-face. That's never a transition that ever occurs unless you both just happen to randomly fall on your knees or something.

I don't know if it is one of the BIGGEST mistakes on the ground, but I think grip fighting on the ground is an underappreciated aspect of ground work that might be worth mentioning in your book. Since getting the right grip in the right location is key to almost every sweep and submission you can often tell what your opponent is going for by the grip they take. You can also thwart a lot of attacks (both sweeps and submissions) by not letting your opponent have the grip they need.

Thanks for your ideas, guys.

As far as stupid things in matwork - what about the starting back to back? that happens even LESS often.

Interesting to talk about gripping in matwork. I do talk about it in terms of transition, that is, have the grip standing that you want to have when you hit the mat, or at least change your grip in the air. But a specific discussion of gripping is a good idea.

So, Chris - Mr. Movie Star - are you volunteering to pose for photos of some of those positions at the training center this weekend? (-;

It would be an Honor Coach. just let me know.

Back to back is just worthless as an exercise. There is some chance of being face-to-face on one's knees (not that it's ever happened to me), but no chance of back to back. I'd forgotten that people do that...

I think you should practice matwork from the positions your attacks or defenses take you to.

In wrestling, I practiced a lot from referee's position, because I ended up there a lot. Otherwise, I practiced my pins from where my takedowns took me, did not practice other areas or angles, but I could get to my angles from however I ended up.

The same for defenses (so, in Judo, I practiced chokes against seoi nage attacks, even when we were doing "just stand up" practice.).

If that makes sense.

I admit, it does seem not to make much sense to start matwork from positions where in real life you would just stand up.

which day are you shooting ?

Agree 100% on the grip fighting on the ground. It's something I've taken from what I've seen and experienced from Judo people and added it into my Jiu-Jitsu game (the moment you get your grip, attack immediately).

Excellent point on the transition aspect from both retrospectives (Judo and Jiu-Jitsu). Doing BJJ, I find that my transitions from standing to groundwork such compared to my transitions when already in groundwork.

Also, I know this thread is almost a week old but I'm trying to catch up.

Most of our 5yr olds spend their first year learning to fall and roll and the basic groundwork like kesa.
Its the only time we do back to back. When they are 6, randoris are on the ground and we start them face to face on their knees.

Back to back is not used afterwards.
Its fun for the kids and it offers a bit of a challenge because kids are disoriented for a few seconds when they turn around (we also have them lying flat on the floor).
As for danger, I find there are more headbutts from being face to face on the knees than seated on their butts.