A tale of two shirts and four daughters

First of all, thank you to the nice people from Fight Chix for the new shirts. You see, what happened was this ... they kindly sent a shirt to Ronda that she liked, and wore, that said on it,

Being appreciative, she took a picture of herself in it which somehow got on Facebook (who knew that random pictures of you could ever get on Facebook? Didn't see that coming).

Well, then one of the four times since the invention of Facebook my 79-year-old mother logs on and calls me up saying,

"Tell Ronda her grandmother does not approve of that shirt, especially not with her younger sister. That is a bad example."


This caused the oldest sister, Maria, to laugh until soda came out her nose, (photo sadly not available),

"What, your mom thinks Julia has never been exposed to the word 'fuck' before? Has your mother actually ever met you?"

Ronda's other, ever-helpful, older sister, the perfect Jennifer, suggested from her lofty 13 months older age, that we could fix the picture. She said,

"Hey, just photo shop over it a new saying. How about, 'Yay, Jesus!'  Grandma likes Jesus."

I suspect her of being a smart-ass about this, but she managed to say it with a suspiciously innocent face. So, here we go. 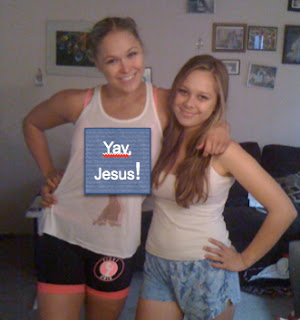 Out of the goodness of their hearts, the nice Fight Chix people sent three new shirts, for me, Ronda and Julia. I'm pretty certain that this one will be Grandma-approved. 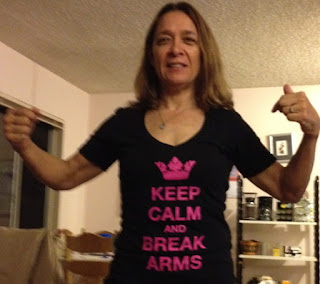 Howdy, I enjoy reading your blog and this was a great post. I'll have to use that line in the future, "Has your mother actually ever met you?" Priceless! Now pardon me while I clean up the coffee I spilled all over my desk from laughing so hard. Rock on Ladies!

Please pass along to "the perfect Jennifer" that I think she's absolutely awesome. She doesn't often get mentioned on here, which I imagine suits her just fine, but there's no doubt she's JUST as badass as the rest of the women in your family. :)