It's a new school year at Gompers Middle School and that means many new students as the eighth-graders from last year go on to bigger and better things. Also, the teacher, Mr. Jose Gonzales, who sponsors the program at the school insists that students meet certain standards of grades and behavior at school overall to be allowed to come to judo and not everyone makes the cut. So.... 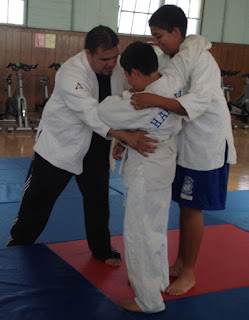 Now we have a lot of new students who definitely do NOT have a gym membership, who only have judo once a week, because that is all the time the teachers from the school and I can donate.

(That is Mr. Jim Sanchez, above, another Gompers Middle School staff member who donates time to assist in the class.)

Picking up a new sport, with only one practice opportunity a week and not a lot of facilities around for conditioning is a real challenge. So, I called Jim Pedro, Sr. up and, as usual, he had a lot of really helpful advice. I thought I would post it here to help me remember and for anyone else, too. 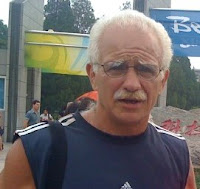 Jump ropes are cheap. Go buy the plastic kind that is weighted. The weight makes it easier for the kids who are not used to jumping rope to get the rope up and over so they won't be as easily frustrated.

Then start again with the jump rope. Do it for 30 minutes to build up both strength and endurance.


Have them start out with a small number, say 10 push-ups, 10 sit-ups, and 30 seconds of jump roping. Add one or five each week. You can also add another exercise every week or so. After they have been doing this for a week, you can have them do is reverse tricep exercises. Add exercises so they gradually are doing a longer work out, working more muscle groups, and it keeps it from getting boring.


One more inexpensive piece of equipment is a chin-up bar. You can buy one for under $15. That's another exercise they can do at home, or you could install one in the gym.


I thought all of those were great ideas. The only problem was, after I got to thinking about it  - I didn't have time to ask because I had to run to pick up Julia from school - I wasn't sure what reverse tricep exercise he meant. I looked it up on line and found that my confusion was not an isolated instance. There were several sites where people debated whether diamond push ups, dips, or some other exercise was a reverse tricep exercise. It was at least half a dozen different exercise that various people identified by the same name.

So, I got this idea --- I am going to go up to Hayastan this week and get Manny Gamburyan (who already said he'd do it) and anyone else who is willing, to demonstrate some different exercises that do not require special equipment. That way, each week when I give the students an added exercise, I can give them a sheet showing some UFC fighter doing it.

Why not a judo player? Well, first of all, Manny, Roman and the other guys up at Hayastan are mostly judo players, too, but the honest reason is that the kids see MMA on TV and they know who these fighters are where they have never heard of anyone in judo. So, I am hoping it will be a motivating factor to get the workout sheets from guys they see on TV. I'm also planning on picking up 15 notebooks at the 99 cent store and telling all the kids to have their workouts recorded every day and have a parent initial that they did it.

I don't think I will really start with as many as Jim said. I'm going to tell them to do half of this -15 seconds jumping, 5 of each exercise, and do it for 10 minutes. We'll try to get up to 15 minutes by Thanksgiving and 30 by Christmas.


Question for anyone who knows - I'll try calling Jim and asking him, tomorrow, but I know it is really late there now. When I looked up on-line to buy a bunch of jump ropes they all said they were 16 feet. That seems awfully long. Some of the kids are tall, but some are shorter than me, as you can see in the picture above. Do you tall people use 16-foot ropes?  I'm thinking maybe you could take out segments and shorten these? Or no?
Posted by Dr. AnnMaria at 10:57 PM

Those plastic segmented ropes are nice. You can whip them around fast, they don't get kinked, and they don't hurt when you accidentally whip your bare leg or toe like with leather ropes.

I believe the idea is indeed to remove segments to customize the length, but this is something you'd do once to personalize the rope for yourself. In a situation where lots of kids are sharing a collection of ropes, you might want to adjust to a variety of lengths.

Some ropes have a different-colored segment in the very center. I'm guessing the idea is that you can see the center whipping around, which may help you work on your skills? Anyway, this means when you remove segments you'll want to remove an equal number from each end, which is a bit more work than just removing a bunch from one end.

Way back when I first bought my own jump ropes I read that when you stand on the center of the rope the handles should come just under your armpits. In practice I found that did indeed make for a comfortable jumping length.

I see other ropes on Amazon that are 6', 7', and 10'. Maybe instead of customizing a bunch of ropes it would be easier to buy them in different lengths to start with.

Thanks for the tip. I think I will buy several and then adjust them to small, medium and large lengths. I suppose they are made that long because it is easy enough to take segments out?

Aha -- looks like the super-long ones are for double-Dutch: http://www.amazon.com/Champion-Sports-Double-Dutch-Ropes/dp/B000KA4NYO/

If you search Amazon for "champion jump rope" you can find other lengths.

I was thinking it must be for those games I played when I was younger.