In my last post, I started to give some of my ideas on what it takes to raise successful children. It takes some luck. I also think it takes the willingness to be the bad guy sometimes.

Okay, I admit it, I was watching Hoarders, and the mother said,

"I just want to be the mother my child wants."

And, to take my favorite advice, not from a psychologist, but from Winston Churchill,

One of the comments on the last post was that perhaps I should use a different word for "successful" because that might be taken to mean being perceived well by other people. It's like the difference between character and reputation. As John Wooden said,

"Character is what you really are. Reputation is what other people think you are."


Since I'm on the quote train, I'll go one more and mention Emmy Werner. She did a famous series of studies on children who came from extremely disadvantaged environment and nonetheless did well. She had to define what she meant by succeeded and she defined it as,

That is, they stayed out of jail, stayed out of rehab, weren't homeless, on welfare living in the projects. They didn't fail any grades in school, were not in special education, were not behind in grade level and finished high school or some college (before anyone points out Ronda didn't graduate high school - she DID get a GED and go to college for a while and did fine in her classes). They had good relationships with their family and friends.

Basically, these are criteria that pretty much everyone can agree are good things. So, that is what I mean by successful and I think it is what most people want for their children.

People say they do, but they don't. I don't give a damn what the neighbors think of me, people at judo tournaments or at my church. I care about what is best for my children. When Ronda was young, there were times when I would take her away from the rest of the class and work with her on something because I thought whatever was being taught was not what she needed to be learning right then. I was very, very fortunate that I was at Venice Dojo at the time, and I had told Trace Nishiyama (the head instructor) when we joined that I wanted to do this and he was okay with it. Some other people were not and complained that Ronda got more attention (yes, she did because it was my attention and she was my kid). I have liked many children that I have taught very much. Gary Butts' kids are awesome - smart, funny, athletic. Lanny Clark's kids are awesome. There are many kids I can name.

I have had people say to me,

"I don't treat my children special. I treat every child the same."


I don't. I treat my kids like I love them more than yours. Because I do. 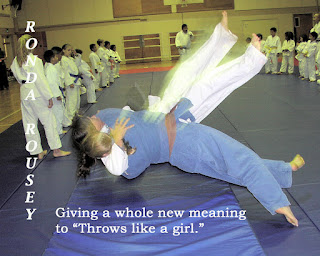 I could give a thousand different examples. We don't live in the biggest house or drive sports cars but all of our children went to private schools. We had a nanny who was wonderful. When our children went to college or trained around the world, we sacrificed to pay for it. When Maria got accepted at NYU, Dennis and I both took on more work to cover the cost. When Jenn got accepted at USC, we just adjusted our budget and schedules so she could move home, make it to classes and her student teaching.

I have seen parents force their kids to stay on a soccer team, at a judo club or apologize to a teacher not because it was best for their child, but because the parent did not want to face the other parents or coach and tell them their child was quitting the team. I know parents who insist their children study 25 hours a week from third grade through high school to get into an Ivy League school. Who are they really doing that for? To impress the other parents? Is it really for your kid? Really?

For the first time in 30 years, I have no children living at home and I have a clean house. I never stayed home and cleaned up. I took my kids to practice, hounded them to do their homework and ran a business to pay for what I felt they needed.  I had a job that took me out of town much of the time, I didn't have dinner on the table every night and my house looked like the before picture in a Clorox commercial. I know people who thought I was not a very good mom.

Those people can bite me.