Are judo players really that wimpy?

The answer to that question, in my opinion, is "No", but the rules sure make it seem that way.

I am off now to teach judo to sixth, seventh and eighth-graders. For many, this will be their second judo class. For others, they may have had a whole 20-30 classes. Not even credible yellow belt level, most of them.

Today, I'm teaching defending from the bottom, including a cross choke and an arm bar.

They aren't allowed to choke until 13. 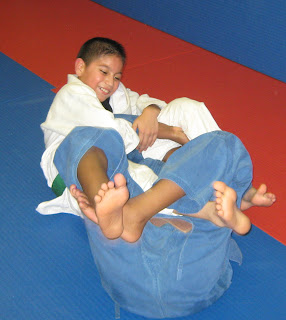 Supposedly, the reason is that the US is such a litigious society (that means we like to sue people). For some reason, jiu jitsu, grappling and mixed martial arts in the same society manage to allow arm bars and chokes and no one gets sued, terribly injured or dies. This is the same society where kids play football for hours in hundred degree heat and occasionally one of them DOES die.

I have even taught as a guest instructor at clubs where they were perturbed that I taught their novice ADULTS to choke.

I just don't understand it. I really don't.

Why are judo players supposedly so much more delicate than people in other jiu jitsu, grappling and MMA?

I really can't explain the different regulations between arts. However I think on average, smarter fighters are well versed in Judo. It is a more technical and intellectual form, and therefore may be thought of as more "dangerous".

I did judo from 5 years old to 13 (starting in 1970 at the Santa Clara Judo Club under Sensei Tosh Higashi).

I remember being stuck at green belt forever because purple belts could choke and I couldn't get purple until 13. I also remember being really afraid of being choked -- who wouldn't be. I got my purple belt and quickly ditched judo for wrestling in junior high.

I'm now a 47 year old BJJ white belt (at the University of Jiu Jitsu under Sensei Saulo Ribeiro). I was both choked and arm barred multiple times at the open mat following my first class (and literally hundreds of times since in the last 7 months). The mystery and fear is gone. I know how to tap.

And this weekend, my 13 year old daughter and partner in crime will compete in her first BJJ tournament, where with some luck she'll both arm bar and choke some other teenagers!

Good luck to your daughter! Come back and post how she did.

Waiting 17 for armbars is silly, but I can see a case for an age limit.

I don't really fancy myself explaining a mom why her 6 y.o. daughter had her arm broken by a 8 y.o boy because she was too bloody stuborn to tap and he was too dumb to understand that if you keep pulling, it eventually breaks.

Not sure what the age limit really should be, but the kids I occasionally take care of are below 10 and I don't see myself teaching them armbars or chokes for a while.

A couple of them, maybe, but the rest, no way.

I think one of the most important lessons of Judo for a kid is to be responsible for his partner's safety. Winning with softness and technique rather than pure strength.

Pain compliance makes for a different lesson, and that's not one I want to teach young children, at least not until they demonstrate that they respect their partners and have enough control over their bodies and emotions.

The line has to be drawn somewhere, no?

Yes, it has to be drawn somewhere - well, maybe. I haven't been teaching my 4-year-old granddaughter arm bars but, on the other hand, I'm not sure I have qualms about it. I mean, she's 4. Whose arm is she going to break?

Armbars for four-year-olds aside, I have been teaching at this middle school for two years, Ronda taught there two years before that and in four years there has never been an injury. !7 years old seems pretty high.

Maybe it's just me being a bit chicken. I sure as hell don't want to deal with a broken arm that didn't happen by accident.

From what I see (and remember from being a kid), it's all fun and games until someone gets hurt and starts crying. They don't know how far they can take things. Add a proper armbar into the equation and instead of crying for a few minutes and seeking attention, there is a chance of an actual injury with all that entails for the kid, the parents and myself.

Aside of any specific age, what do you look for as a sign that a kid is ready to learn armbars and chokes?

Do you teach armbars and chokes to all kids no matter how they behave, or do you have some guidelines to figure out when a class is ready for it?

Thanks for the good wishes ... back to report that Erin's first match was against a boy, whom she beat on points. Went on to take 3rd. She didn't arm bar anyone, but she defended a couple beautifully! Thanks again!

I don't know about the kids, but in the adult divisions, have you seen how high level Judo fighters fight against subs/pins/throws? They go 1000% so this has caused many many injuries during the years, and that is just ONE of the reasons a lot of the stuff was banned from competition.

There is a big difference between the local kids' divisions and the Olympics. Yes, there are more injuries at the international level because a gold medal is on the line, national pride and someone's whole career. In the same way, the NFL has way more injuries than the pee-wee football league

I remember a certain particularly awful referee in the midwest make this rule change at the last minute at a local tournament around here. The tournament director was furious and none of the other refs had the backbone to support the tournament director (which, IMO, is even more pathetic than the ref who made the decision). Has this idea started to gain traction elsewhere in the states?

I'm on a hiatus from judo tournaments until someone decides I can have a brown belt for this reason - I have a blue belt in BJJ, I think I know how to do a simple juji gatame safetly at 24.

I don't think it's that judoka are any more fragile than jiujitseros, but there's definitely a difference in the stance towards governing bodies and the rules. Doing BJJ also means you're not necessarily competing under the banner of a national governing body so local tournaments can make their own rules. The down side is that I've never had any insurance explicitly for BJJ like the judo governing bodies offer. Their insurance, their rules.

Most of my friends who run commercial dojos have business insurance. As you said, their insurance, their rules.
We are covered under the school's insurance. In four years, we have not had a single injury.

I find it weird that the armbars and chokes are the things that are banned under conservative rulesets, when the only grappling injuries I've ever had have come from being wizzer tripped (resulting in a dislocated shoulder), and being thrown (resulting in a broken rib).

That said I train some strong kids, and I can see the benefit in not allowing any neck cranking or leglocks, due to the spaz factor.

Stunningly clueless post coming from someone claiming to teach.

Teaching armbars and chokes on a 2nd or 30th class?
Appaling.
Ego over pedagogy.
Judo isnt a race and it sure as hell isnt BJJ which has zero organizational or pedagogical structures. Everyone makes it up as they go and 9yr olds learning how to choke is considered ok.
To even compare it to MMA and BJJ shows a total lack of understanding of all three. I refuse to even compare MMA to judo on the teaching level.
The French Fede manual for 2011 that I was browsing through has over 200 pages.
Its a sport that is studied, analyzed worldwide by educators.
There is a reason why Shime-waza and Kantetsu-Waza are limited in teaching.
But hey, I know people who bitch when sacrifices moves are also forbidden for some groups. It isnt done just for kicks, there is some serious thought put into not allowing sutemis with young judokas.

This rush to get 'there' as quickly as possible is the result of a generation with no patience, who want things now.
Why wait? Why try to teach a martial art which combines Shin, Ghi and Tai when all they see and know is juji gatame on TV?
These words come from Sensei H. Nakamura.

And saying that its ok because idiots send their kids to sumo football so they can smack their heads is so intellectualy weak, its staggering.

The navel gazing is world class though.
Its NOT a US thing about litigiousness, its done everywhere on the planet to different degrees.

In Canada, you cant choke at U15 contests but are allowed at u17. yet you can do kansetsu waza at u17.
For seniors, there are also limits for these for yellowand orange belts.
Most dojos will start teaching them 1-2years before they can be used in competition.
Personally, I have no problems with this especially for competition judokas since there is very little room for newaza in modern judo.

Its stunning that a teacher is totally unaware how judo is taught in other countries thought.
Its NOT an american thing.

I usually am not one to criticize people when it comes to teach youth judo. Our dojo is the biggest in the country and we start kids as young as 4-5 while many others only start them at 6-7. Fine. I see nothing wrong in that.
First and foremost, its a sport, not a life and death combat like many wish it was. Security is among the most important tenets of the sport ESPECIALLY with children.
I repeat... ESPECIALLY with children.

Showing deadly techniques to people who are too young to grasp the danger or dont have the necessary skills or maturity and most importantly experienced hasnt slowed down the development of some great judokas.
It has however caused egos to be crushed (but Bobby does it? why cant I?), hence the judo is for pussies.

I thought this was a joke when a colleague showed this at work. Maybe trolling for page hits.
But its hard to fathom someone who claims to be an instructor say they dont get it. Maybe thats the lack of humility that many dojos seems to forget to instill.
You might not like something but to not be able to see a problem-discussion from two-three sides is a rather closeminded approach.
He who thinks knows it all doesnt need to see.