So you think you're tough?

I was driving to San Diego today and remembering all of the times I drove from San Diego to Los Angeles for practice. I thought, we really ought to appreciate the sacrifices these competitors in judo and other martial arts make. They have to drive all over the place to get to practice. I remembered how hard those practices were, and thought again, yes, an average person wouldn't do it. Probably I don't appreciate how tough these young people are and the effort they put out to get better.

Then I got to the luncheon I was driving down to attend. It was a reunion of a lot of the judo people who trained and competed together over the past thirty or forty years. Since I worked out at the Naval Training Center for years (before September 11, it was a lot easier for civilians to work out on the base) there were a lot of Navy guys there. There were also several guys who had been in the Marines and at least one Army and one Air Force officer.

They had served in World War II, Korea and Vietnam. Joe Ciokon and another of the Navy guys talked about a young man - I think they said he was 19 - who had locked himself in the boiler room of a ship that was under fire and damaged so that he could repair it enough that it would stay afloat while the rest of the sailors had a chance to evacuate. He died there and they later recovered his body. 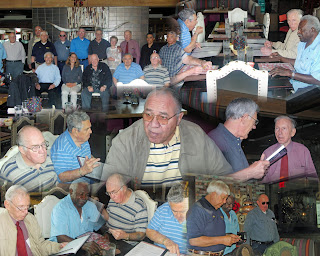 At the other end of the table, they were discussing the assault on a cliff during World War II, guys climbing up ropes to attack the enemy from the rear - an enemy that thought they were not going to be attacked from the back because it was a sheer cliff.

Other people were talking about their service in Korea and Vietnam.

It occurred to me that, maybe, just maybe, this is one reason that people aren't so impressed with people in jiu-jitsu, judo and other martial arts. Don't get me wrong, it's really good you are doing what you're doing instead of laying on the couch eating potato chips and playing Donkey Kong. It just may be, though, that old guy who you think ought to appreciate your sacrifice more, when he was several years younger than you was in a jungle, in the boiler room of a ship or patrolling the streets in a country on the other side of the world where for all he knew, around the next corner someone might shoot him. And there was no referee to stop him from getting hurt too badly.

Just something to think about.
Posted by Dr. AnnMaria at 11:24 PM

Dear Dr. AnnMaria, much thanks for your thoughts and words concerning our Veterans and toughness/sacrifice! Chaplain and fledging Judoka, NPS Judo Club

Thanks Dr.D. If my dad were still here he would appreciate your remarks. He was literally the proverbial 97 lb. weakling(externally anyway). He needed his dads' permission to join at 17 yrs. of age in 1948 and retired in 1974. According to what he told us, he was 3 lbs. shy of making minimum weight reqs. So he left the recruiting station, went and bought 3 lbs. or so of bananas, ate them all in one sitting, and returned to the station. He re-weighed, passed, and the sergeant took one last look at his distended belly and asked him if he was sure he wanted to join the military. The rest, and 9 kids, later is history!
My father-in-law is a WW2 vet. He left high school to join in 1942, became a Seabee, made it through the Pacific war, and returned to finish high school at 21 yrs. of age. He then, like my dad, became a productive member of society.
Once again, thanks for the comments.

At times we do think a little to highly of our "toughness" in light of the many people who face real life and death issues. As far as your reference to donkey kong, I got it, but no one under 40 will, heck, I still like pong..........

Don't be hating on Donkey Kong, Dave. My kids LOVED that game when they were little.