Why Judo is Better than Karate 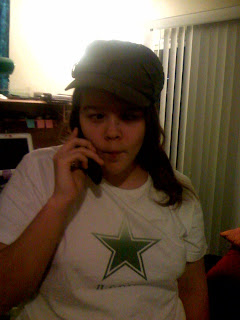 Since my niece did not clean her room (see photo of non-cleaning karate niece at right on phone instead of cleaning her room) I have decided to make good on my threat of listing all of the reasons why judo is better than karate.

1. Judo is not done to music, thus making it something done by tough people and athletes (some of whom are the same people). Judo has kata and I have had the privilege to meet some very well-respected people in kata. Yet, not once have I seen Greg Fernandez, Brian Marks or even Eiko Shepard (who is a lady) break out into nage no kata to the tune of "Walk Like a Lady." I actually have seen this in karate.
2. Seriously, related to number one, how intimidating are you to someone who attacks you if your best response is

"Back off, buddy or I will kick around to the tune of All the Colors of the Wind!?"

3. Nothing in judo is done with fans. We have tournaments. They involve throwing, chokes, pins and armbars. We have katas. Some of them include knives and guns. No fans. I don't care if you say they are supposed to be metal-tipped or what. They are fans. Imagine if you are in that movie Sky High and the teen super-heroes meet.

"What's your name?"
"I am Throwing-Choking-Armbar Woman. Who are you?"
"I'm Fan Girl."
"Ri--i- ight. Look, maybe you can fan us when we get back from defeating the super villains. Catch you later."

Guess who is NOT going to be voted coolest in the teen super-hero class.

4. Every third person in karate I meet claims to be a world champion or the Korean national champion. They must have world championships in karate every day and twice on Sunday. As for Korea, I can only assume their national championships is by date of birth, so there is a division for people whose birth date was July 11, 1986 and so on. People in judo lie too, but they lie smarter. They all say they were seventh in the world championships (because the first five names get published). If they are really creative they say they were in the Olympics representing the country of their ancestors which is always some island nation you never heard of like Paprika or Cayenne.

5. Only in karate do you receive a trophy which is larger than the combined mass of the people you defeated. That is just plain wrong.

6. No one in judo is called Grand Master Katydid of the Owa Canal or other weird titles. This is a dojo, not the set of Lord of the Rings for crying out loud.

7. Judo throws do not have names that sound like today's special at a Chinese restaurant. In judo, one of the most common techniques is called a shoulder throw because you - I know you would not guess this - throw the person over the shoulder. The side hold is done by holding someone down from the side. Karate moves have names like "The crane of a thousand sidewinders" and "The constipated dragon." What's that all about?

8. Judo has a technique called the naked strangle, which could actually be used for strangling naked people. One might wonder, if one were me, why you would have let them get naked with you in the first place if you feel like strangling them. I can only speculate that they did something after the naked part occurred that precipitated the strangle urge. Still, I can comprehend the theoretical need for strangling naked people so judo gets extra points for both foresight and logical naming convention.

lol awesome! sam would hate it!!

Awesome Blog. I was laughing all the way through it.

Aw, come on, Dr. A. You know nothing is more rousing than a spirited rendition of Junokata set to Ride of the Valkyries!

And you know, the three-step attacks in Nagenokata can be timed perfectly to coincide with "once...twice...three times a lady..."

Being an american woman, how do you consider judo with your traditions and lifestyle? Is it suitable to an occidental woman mother? Thank you.

Is judo suitable to an occidental woman and mother? Well, I have four children, which puts me definitely in the mother category, so, yes, I think it is perfectly suitable.

My family is very Catholic and I was raised to always try to leave the world a better place than I found it. I think the judo principle of mutual benefit and welfare is very compatible with that world view.

I am a karateka and a judoka. The problem is, you like most others don't know what karate is. While I agree with you about 6' trophies, music during kata, fighting with fans, etc...that is NOT karate. Karate has become a generic term unlike judo. Therefore anything having to do with kicking and punching in a gi, people genrically call karate. What you have probably witnessed was Tae Kwon Do and other forms of sport striking, but not "Karate-Do". I have prcticed Shotokan karate for almost 20 years. There are only 5 forms recognized in Japan and Okinawa (Shotokan, Shorin-Ryu, Wado-Ryu, Goju Ryu and Shito-Ryu). in NONE of these styles will you ever see striped uniforms, musical kata or any of that other nonsense. This is precisely why in the karate world, there is a big distinction between "Traditional Karate" and "Sport Karate" the former not even considered "karate" by traditionalists.

Not getting on your case but be careful what you write. There are lots of traditional karateka that practice judo, JiuJitsu, Kendo and are real purists about their art. Gichin Funakoshi ("Father of Modern Karate") was a DEAR friend of Dr. Kano and Dr. Kano asked that his top students be trained Funakoshi. In NO Japanese art does any master title himself, "Master".

That is NEVER heard in traditional Japanese organizations. I'm afraid the stuff you have been exposed to is NOT karate but probably Tae Kwon Do or some derivative of kung-fu CALLING THEMSELVES "karate" (unfortunately). THis is acceptable practice among Korean and Chinese arts but not Japanese arts like "Karate".

The philosophy of Traditional Karate (LIKE JUDO) is maximum efficiency / minimum effort and ikken hitsatsu (one attack / one kill). In JKA style karate, we wear plain white uniforms and win by IPPON or 2 WAZARIs (LIKE JUDO). Same philosophy of combat....no second chance in the street.

If you want to see a good demo of real karate see this http://www.youtube.com/watch?v=ufh6B-r_HOM

Try not to use labels until you know exactly who you're criticizing. Traditional Karate athletes are wholly dangerous. Sport tag-sparring like Tae Kwon Do is ok for kids but it is NOT an considered an art.

I have a couple of other points I forgot.

When you witnessed "karate" compeitions, they probably wore head gear, foot pads, etc. The International Traditional Karate Federation ITKF and JKA rules allow for NO PADS, whatsoever. We are allowed surgical latex gloves (HIV transmission prevention) and a mouthpiece....THAT'S IT.

Now, I hope you would agree that Judo is not better than Karate (Real karate anyway) or vice versa. They are entirely 2 different art's and I have trained with many of the best in both arts. Actually my Shotokan instructor was trained in Japan at the Kodokan in Judo under Mifune in the 1950's when the karate people shared space with judo people.

Anton Geesink was not only a World Class judoka, but he was a sandan in Shotokan trained at the JKA by Masatoshi Nakayama. :)

Both are great martial arts. I am saddened by your comments. Try to have some dignity and respect others. I train in both and both my sensei's are formidable. To critise another martial arts show your lack of confidence in your own art.

I think Judo is more pure and more traditional than karate.

You dumb harpy. If you face off against a karate-ka and he gets a good punch in to your jaw, you'll be down at your dentist's for reconstructive jaw surgery before you can make another "funny" joke about karate. If you get him on the ground then great, you'll win. But don't underestimate the power of a well trained karateka with a fist that's been trained. Your hubris is inappropriate for a soi-disant martial artist.

i take both judo and taekwondo and i think there both grate martial arts.