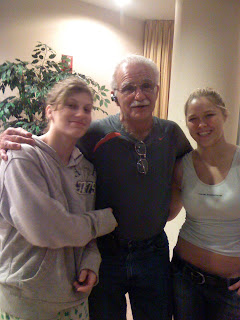 This is the second guest post on this topic by Jim Pedro, Sr.
How do you handle people/students with short attention span?
It depends on their age. Usually it is the little kids who have difficulty paying attention. Call their name and they pay attention for the next ten seconds. Then they are back to playing with their belt. When they are little, they don't have much attention span. They grow out of it eventually. I yell their names to startle them but I never yell at them for real to scare them or get angry. They're just being kids. If you expect little kids to act like adults you're going to be frustrated your whole life as a coach. So, I would say, yell, “Johnny!” when he is not paying attention and Johnny will pay attention for 15 seconds. Show something in that 15 seconds, and don’t worry too much. He’ll get a longer attention span eventually. They almost always do.
What is the ideal age to let your student compete in tournaments?
The ideal age is when they want to compete. We let them start at five and six years old if they want the experience of competing. At 5 or 6, if they don't want to compete, we don't push them. A lot of kids don't want to compete because they are scared of letting their parents down, that  their parents won't have the same opinion of them.
We have a separate competition class and the kids who are in that class are required to compete. However, they can stay in the regular class as long as they want, forever, if they want to, and they are not required to compete.
All of our kids compete in the in-club contests. We don't force them to compete outside of the club. Competition is good for children. Life is competition. You compete for jobs, for grades. If you aren't used to handling setbacks it is harder for you to learn when you are older. When they get older they are going to have to compete and they will have had the experience of losing and not achieving what they wanted to get and trying harder.
What do you do when kids start your judo class and they are really out of shape? Do you ever tell people they need to get in better shape before they can do judo.
If they are out of shape and they start judo, they will get in better shape than when they walk through the door. It depends on how you structure your classes. Our classes start with 20 minutes of calisthenics. You just encourage them to do as much as they can do and don't make a big deal out of it. Tell them if they can't do 10 push-ups correctly to do one, the next week they do two and eventually they do three. Focus on the improvement rather than what they cannot do. If they come to practice regularly, they will improve.
If you see a coach yelling and mistreating their student at a tournament, what should you do?
It would depend on the situation. Normally, I would not get involved because in most cases I wouldn't know the whole story. For example, once when my kids were little they were playing with a ball at a judo tournament after I specifically told them not to do it. The ball went out in the street and Jimmy ran after it. I pulled him back and swatted him on the butt. He was just a little kid and I  wanted him to remember not to run out in the street. I don't think having a talk with him about traffic safety would have done it at that age. If someone had walked by and seen me, they might have wrongly assumed that I spanked him for not doing what I wanted in the tournament, which had nothing to do with it. I just wanted to keep him safe. As far as seeing a coach actually beating or physically abusing a child at a tournament, that’s entirely different but I don’t think that really occurs that often. In most cases, I would rely on the parents to handle it. It’s their child and they know a lot more about what is going on than I would as the coach from another club
Posted by Dr. AnnMaria at 4:14 PM