You Can Always Run Slower 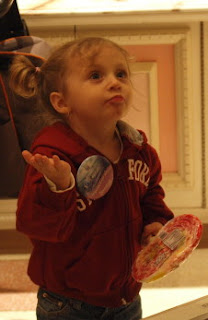 Today, I ran a mile for the first time in over five years. I still remember the last time. I used to run eight miles every other day, from pier to pier. Since I was telecommuting back then, I spent all day sitting in front of a computer. Every other day, I would run down to the beach, run from the Santa Monica Pier to the next pier south which is through Venice and by Marina del Rey. Then, I'd run back and run the seven blocks uphill to get home from Santa Monica Beach. The last time I did it, I was running uphill to go home and my knee gave out. This had happened so many times over the years, I just tried to put it back in and keep running but I could only go about two steps. So, that was it. I ended up getting my knee replaced, which, in short, means they cut a nine-inch incision down my leg and did generally painful, awful things. No one I knew that had their knee replaced said they were back to running, they just said it didn't hurt any more. That's why I didn't bother getting my knee replaced for several years. I'm up to biking six miles a day or more but it's not the same thing.

SO... yesterday, I was at Disneyland, chasing after my granddaughter, Eva, the human pinball, running up steps to Tarzan's treehouse and down the street at Toontown and I thought, hey, I can run again. 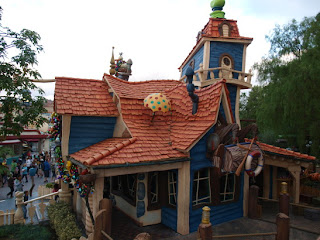 Walking around for hours is the kind of thing that used to kill my knee but I woke up this morning and I felt fine. So, I thought I would try running to the ocean and back. I was a little nervous about it since having your knee replaced is  one of those things that lets you understand how people survive torture. If you think I'm kidding, you never had it done. I was thinking, what if I can't run that far?

Then, I remembered Coach Frances Bailey. She was my college track coach. Coach Bailey is one of those coaches who is very calm, matter-of-fact and generally positive. She was the opposite of a lot of those screaming, yelling, negative coaches you see too often in judo. Of course, if she did call someone an idiot or a loser that made it ten times worse because you knew that she had considered it and she truly meant it. One track meet, we were all watching a race and one of the runners from another team slowed down and finally started walking.

"Girls, if I ever see you do that, well, I don't know what I'll do but I'll come up with something and you better believe you won't like it. You never, never stop running in a race. If you get tired and you can't push yourself at the pace you were going, you can always run slower. There's no excuse for stopping, ever. "

Out of all the classes I have taken through college and graduate school, there are three pieces of advice that stuck with me the most and that was one of them.

"You can always run slower."

She told us that same thing many times in practice after that, as individuals, to one person or another when we were tired and wanted to quit before practice was over, before we had done the evil number of sprints she wanted or run far more miles than the average student with 1500 SAT scores ever dreamed about. (Washington University in St. Louis is known for its medical school and not its track team for a reason - a fact pointed out to the unsympathetic coach by more than one of my teammates.)

I remembered Coach Bailey about 50 times today as I ran a mile and a half down to the ocean and back. 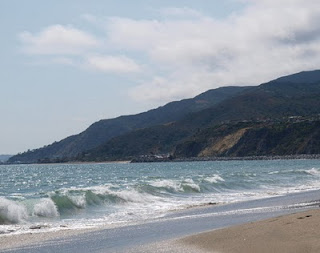 I have only recently found your blog, and am enjoying it greatly. Today's hit a bit of a cord. I am old and have been in Karate forever, at least until I switched over to Gracie Jiu-Jitsu 4 years ago. In my training, I never stop running, so to speak. Old farts can't afford to ease up all that much if they want to roll with the twenty-year-olds.

In actual running, I slow to a walk sometimes. We've got some of those hills where if you try and run up, you actually go slower than walking.