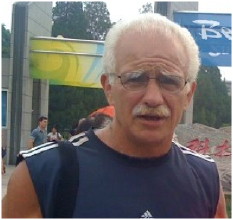 When I was talking to Jim Pedro, Sr. today about Kayla Harrison having won in Abu Dhabbi (congratulations, Kayla), it occurred to me that he has coached three women to world medals (Kayla Harrison, Ronda Rousey and Barbara Fest) out of the eleven medalists this country has had. (The other eight were Mary Lewis, Darlene Anaya, Eve Aronoff, AnnMaria (Burns) De Mars, Margie Castro, Lynn Roethke, Liliko Ogasawara and Christine Pennick).

Rusty Kanokogi, who was a HUGE proponent of women's competition, and the first Olympic coach for a women's judo team, had a healthy dose of skepticism for men coaching elite women players. I understood her position, while I did not always agree with her.  In general, she did not believe that male coaches would be as supportive of female athletes or as empathetic or understanding as a female coach. If you knew Rusty, you know that she didn't mean empathetic in the "Oh my poor baby" way, but as far as understanding, for example, that women are naturally a higher percentage body fat, that women are more flexible, making some techniques easier, etc. She also thought (correctly in my opinion) that female coaches were more understanding of the sexual harassment and general disrespect that women had to tolerate just to get on the mat.


So.... I got to wondering what was it about Jimmy that made him a good coach for women. Not only has he had success lately but he used to have a terrific women's team back in the 1970s, not exactly a heyday of enlightenment for women's judo (in fact, I don't think there's EVER been a heyday of enlightenment for women's judo). It is NOT that he had women working out with the men, although he did do that. Jim was certainly not the first or only person in the country to have women training with men in his dojo. I would agree with him that is a necessary condition for women in the U.S. to be a successful competitors. There just aren't enough tough women in any single area to limit your training to other women.

What I noticed about Jim today, and Ronda has mentioned it before as well, is that he treats the women the same as he does his male players, and he does it very un-self-consciously. For example, today he was talking about the other players in Kayla's division, each one she had to fight, what each player's strengths and weaknesses were. He used to do the same thing with Ronda. For both of them, he would talk a lot about their potential, their physical strength, their work ethic.

Many (not all) other male coaches have a noticeable difference in the way they talk about their male and female players. Even coaches who are coaching elite female players, when I ask them about the competition will say,
"I don't follow women's judo. All of the women in Mary's division do s--- judo."
If you don't have respect for women's judo, you aren't going to do what Jimmy does and scout the opponents in detail. You aren't going to focus on how your player matches up against her competitors and you aren't going to study your own player's judo in detail because you are limited by your own prejudice against women's judo.
While nothing is a guarantee, it seems to me that having a sincere respect for women's judo as a sport and your player as an athlete is related to greater success internationally.
I've noticed that in Europe, and yes, in Japan, too, there is more respect, both among male athletes and male coaches, for women who win international competitions and I suspect the greater success of their women's teams is no coincidence.
Posted by Dr. AnnMaria at 1:07 PM

Hi AnnMaria. Thanks for this blog, I think it is very insightful. As a young man I was part of a training group led by Roy Inman, we had lots of strong women players. More recently I employed Roy at the University of Bath, and I saw the same attitude to women's judo, that you mention you see with Mr Pedro. Your post resonated with me. Thanks. Mike Callan

Hi AnnMaria. I find this very interesting. Although I coach both male and female player I generally only work with females in performance. I currently run a coaching course and this year I wanted to bring in information on the technical differences between men and womens judo, despite contacting several well known coaches only one said they could (Emanauela Pierrantozi) and she gave some very interesting lectures on the topic.

The technical and tactical components of lightweight womens judo is now the subject of the PhD I am undertaking.

Thanks for raising this topic in the public domain again :) Bob Challis

A week or so ago, I was watching a couple of male coaches demonstrate ways to get left juji gatame when an opponent has your left leg scissored. All the contortions left me scratching my head. I showed them how I would do it, which is to let the opponent keep the leg, twist, throw my right leg over and do the armbar. This technique, like the switching hips counter to a hip throw, is done more often by women because of greater flexibility.

These are generalities, of course, for example, ura nage was Christine Pennick's favorite throw.

Seriously, it just stands to reason that, if men and women have differences in flexibility, strength and body type that there will be corresponding differences in the most likely techniques.

Mike - Yes, I remember Roy Inman very well, and I agree, he was another very good coach for women's judo.

AnnMaria..I have just found the wonders of Blogs;yours is GREAT! Jimmy Pedro Sr was great at coaching women! And just as you said,because he treated us no different than the men.I moved from PA to train with him and am glad I did. We trained with men because the more bodies the better. I think another reason is that we wanted it sooo bad - we wanted to be winners. We had some good male Judoka at Massasoit but they couldn't deal with the training. We didn't call him BOSS for nothing! In OCT 1979 a US team, men and women, went to South Africa.There had been some foul up with the women and our trip was canelled. Jim was out of the country and was a tad PO'd when he got back. He was going as coach / player. He got the trip back on line for the women within days of leaving. So what we had to sit in customs waiting for our visas to catch up to us. Needless to say not everyone was at weight. It was fall in the US and summer there and the altitude was worse than Colorado. Your lungs would burn like fire going down your throat when you breathed hard. The guys were complaining about the intensity of the practices which were -1 to get aclamated ASAP and 2for folks to make weight. There were at least 5 of us from Jim's club. We just laughed at them
....this was what training with Jimmy was all about! We did it all the time! It really changed alot of their attitudes about women in Judo. And we never got harassed by men cause they knew who our coach was. Pam Adams was the only one of us that could always win a draw consistantly; cutzie that she was. The rest of us knew that we flat out had to win cause many of the Reffs had "issues" with Jimmy. People would ask what it was like to compete for the US. I would tell them I didn't. I fought for me, my coach and club. If the US wanted to spend money on us like they did the men I would add them to the list. We were loyal to the Boss! Cause let me tell you,if you listened to him you won!He called me a woose cause I didn't have a real killer instinct but I'll say this,,,when I tore out my ACL at a trials at the USOC I wouln't quit till he told me I could! I admire him and have much respect for him and glad Jimmy JR is following in his footsteps! Dang and after all this drivvle i hope i can figure out how to send it!
Barbara Fest