You Suck at Armbars and You Don't Know any Chokes

If you don't know anything about a person your best prediction is the average. For example, if the average woman in America is 5 foot, 4 inches tall and you are asked to predict the height of the next person to come through the door, it would be pretty stupid of you to say 7 feet  or 4 feet, 1 inch. Your best guess is 5'4" and you probably won't be too far off.

This brings us to you. Yes, I'm talking to you. I have no idea who you are. Who ARE you, anyway? 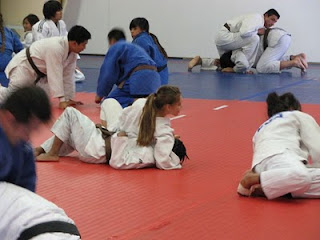 Since I don't know anything about you, I am going to predict that you are like most people and your armbars suck. They suck in some specific ways.

First, you don't lock the arm against your body.
Look at the end of this video where Ronda has Autumn in an armbar. That's the position you want to be in. (Yes, it isn't the greatest video because the referee keeps walking in the way. You should have paid the $9.99 to see it on fight TV. Cheapskate. )

Second, getting your body into the position is easier if you start by locking the arm against your body, rotating toward her head to break the arm away and then back to a 90 degree angle from your opponent. You should do this, but you don't.

Third, you don't know enough ways to get into an armbar. Okay, I will admit that video was from an MMA match and the punching her in the head to get the arm free is not allowed in judo, although I can certainly empathize with the impulse.  However, I see so many people who only have a single way of getting into juji gatame. They do the same roll over move that Jimmy Pedro, Jr. does and that's it. There's nothing wrong with that move at all. It's great. Uchimata is great, too, but I don't recommend it as the only throw anyone ever does in their life. You can do juji gatame from seoi toshi, tomoe nage, on people coming in trying to pin you when you are on your back, when your partner is on her hands and knees you can do it turning towards her hips, towards her head or throwing yourself backward. (Keep your head tucked like in ukemi so you don't knock yourself silly and look like a moron.) Variety is a good thing. Try your armbars different ways.

Fourth, you don't know any armbars besides juji gatame. Right behind juji gatame I think the technique I scored the most with was ude garame.  For those of you who don't know any Japanese, juji gatame is sometimes referred to as a cross-body arm lock or a straight arm lock while ude garame is sometimes called a bent arm lock. This picture shows ude garame as a combination from a pin. Personally, I did it a lot from kesa gatame (another pin), where I armbarred the person with my leg.

Okay, and don't even get me started on chokes because you don't know any except that stupid sankaku which some people call a triangle choke. But that's a whole 'nother story. You know so few chokes we're doing a whole day at the West Coast Judo Training Center on December 11 on nothing but chokes. It's called

Masters of Submission - chokes, chokes and more chokes --
because certain people who are younger than me always wanted to be He-Man in Masters of the Universe cartoons when they were children and other people always wanted to be She-Ra Princess of Power. I wanted to call it the Great American Choke-Out but certain young people did not listen to me. Power of Grayskull my @$$!

Anyway, learn some chokes, damn it! Come down on December 11 and learn to choke people's lights out. Incredibly, this is actually legal in California.

Learn some more arm bars while you're at it. Ones that don't suck.

Variety in techniques and positions is good! That goes for your sex life, too.  Unless you are under 18 years old in which case I order you to unread that last sentence. Or one of my daughters. In which case, you should join a convent. Preferably one named after St. Jude.
Posted by Dr. AnnMaria at 11:15 PM

It's great to see Ronda go for the juji gatame in a mma match. If done sloppily, I think it comes with a risk of losing position, but her technique was crisp.