Things I Know about Judo 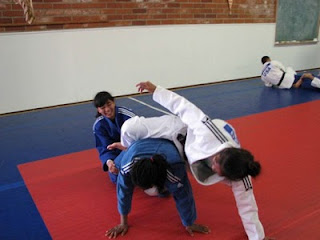 If you did not attend the clinic at San Fernando Dojo this week you missed the opportunity to learn about judo (see cool but unrelated video of San Fernando sensei Richie Endow doing hane goshi here). Clinicians included yours truly, Dr. Jacob Flores, Ronda Rousey, Kyle Taketa from Gardena Dojo, Dave Honda and Vanessa Cualquim from South Bay Judo and Naynay (Amelia) Fulgentes from Mojica Judo. The last four, including the young lady from Mojica whose name I am sure I completely butchered in spelling (sorry) just came back from the Junior World Championships. They, along with Ronda, provided the youthful good looks and athleticism quota of the room, while I held up my end by providing the quota of snarky comments.

As a public service, I am including here some of the profound points I made.

Judo has enough rules, you don’t need to make up your own. When someone says about a person who is not doing anything illegal, “That's Not Judo. I'm Fine With Losing If That's What You Have To Do To Win”, then yes, he/she is going to lose more often than someone willing to do any legal technique. If you refuse to do matwork because you would rather win by a spectacular throw than 'grubbing around down there on the mat' then be prepared to lose occasionally on the mat. If you don't practice grip-fighting because, "I prefer to be able to throw you from whatever grip you get," then you are just being arrogant. If you refuse to practice transition from standing to matwork because, as one coach told me, "It's just bad sportsmanship to jump on a guy when he is down", then you are going to lose to people who are better at transition than you. I want to emphasize that I am NOT talking about cheating. I have never, ever been one of those people to say if the referee doesn't see you do it, it's not illegal. Deliberately breaking a rule is cheating. Fighting tactically - for example, doing low risk attacks when you are ahead by a waza ari and there is a minute left, stalling when you are ahead by a waza ari and there are ten seconds left, those are tactics. Following your opponent to the mat to an armbar is just good judo. Making up these "My judo is better than you" rules about gripping, combinations, transition or whatever makes no more sense than deciding you won't do o soto gari because only forward throws like uchimata are "real judo".

You play people, not principles. While going to the mat is generally a bad idea with 20 seconds left on the clock when you are behind, since it is usually more likely to get a yuko or higher score while standing, if you are much better than your opponent in matwork, it's wise to go to the mat. Similarly, it is usually a good strategy to go to the mat when you are ahead and eat up the clock - unless your opponent is  much better than you in matwork. The same is true of techniques. If your best throw is seoi nage but your opponent's only really good move is a tani otoshi counter to seoi nage, then, duh, do o soto gari or something else.

I'm surprised I would have to explain this, but, then it occurred to me that people don't emerge from the womb knowing judo and they have to learn these basic ideas at some point. For relatively new judo players, those who just haven't been paying attention and some of you who are a little too in love with your own ideas sometimes, the above explanations were necessary. You're welcome.

Since I know that you are just crushed at the missed opportunity to hear me talk, in my continual effort to meet all of your needs and desires, check back tomorrow for an actual pod cast of me talking about matwork drills and some other random stuff. 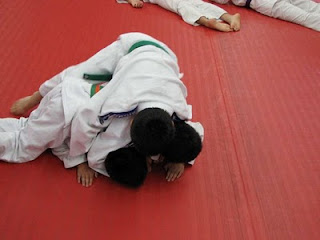 well ann another problem with some sensei's is there "I own you syndrome", it's there way or no way.Give you an example, last year we were going to attend one of your clinics in vista in wich we're not to proud to learn from someone else other than their sensei. We asked if it was ok to attend your clinic the answer was NO!Anyway we no longer go to that dojo because although I don't Have a black belt in judo I have a Black Belt in common sense.

Going back to your point about transition,I questioned the fact that my kids were being taught to give their back because the kids knew that the referee call's "mate"and don't worry about getting choked so by the time they reach 13 and can choke well you guessed it! "BAD HABIT TO BREAK" so in order to develope that "transition" you talked about we supplement judo with jiu-jitsu so that the skill of transition will be developed like getting in your guard instead of giving your back and waiting on the referee to call "mate"and we don't have all of these silly rules to sabotage our sport.Yeah I Know what your gonna say there posture is in jeopardy they have a good judo base as far as the posture is concerned so they don't stand like they are going for your legs.

well ann I hope to attend One Of your clinics soon so maybe you can post them on your blog so that we can attend.

There is supposed to be a two-day weekend camp in San Diego between Christmas and New Year's. I think the West Coast Judo Training Center group will almost all be there.