How to Do Tai Otoshi 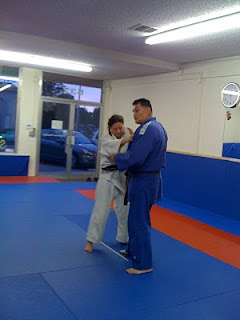 First, get a standard right hand grip. With your left hand, grip her right sleeve at the elbow, grip her left lapel with your right hand. Now with that right hand pull up and out (look closely and you can see this in the picture).  Notice that my right foot is between her feet. It makes a triangle with her two feet and my foot as the tip of the triangle.

Second, I pull her forward to her right as I step in, putting all the weight on her right leg. I pivot on my right foot and spin my left leg behind me. Both knees are bent. I pull her up as I go down. 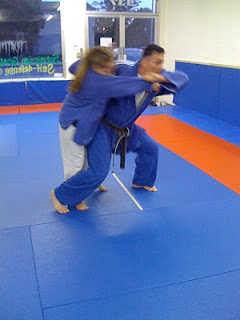 Third,  shoot your right leg so it is touching hers between the ankle and the knee. Note the placement of the left foot. Most people have that foot too far back, trying to get almost between the opponent's legs, and, as a result, they themselves are off balance. My left foot is actually on the outside of the opponent's left foot and slightly in front of her. Notice that both of my elbows are up. My left knee is bent, almost touching the floor and my toes are behind her foot. A mistake many people make is they drop the elbow as they turn around and they are pulling down instead of up and out. 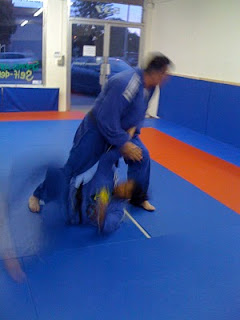 To finish the throw,TURN your body, pull around in a circle with your left hand so it ends up on the outside of the left leg. Push up with your right hand (your right elbow should be underneath the arm pit). It's a strong tsuri komi goshi grip, if you are familiar with that throw.

A common mistake is to forget to turn the head. Especially beginners seem to just keep looking at the opponent. If you must look at the opponent turn your head around so you can look at their feet flying up in the air.

(The aspersions that were cast at the West Coast Judo Training Center that I have a foot fetish because I prefer to look at people's feet as they fall rather than stare in their faces is completely false. It is just good technique to turn your head and if I happen to see their feet that is coincidence.)
Posted by Dr. AnnMaria at 10:42 PM

Yes, he threw her so hard she changed race. I remember a friend of mine in high school who, when his mom would get really mad at something he did would say, "Boy, if you ever do that again, I will beat the black off of you."

Who knew that was actually possible?

Was it Blinky's mom?!? That would be so awesome if it was. That would me that his powers were transferable to who ever he touched. Hey, sounds like a new superhero, no? No, you can't use my superhero in your new judo book.

That would be awesome if I could change my race, like when I'm driving through Arizona or Orange County. But now I'm really getting off topic.