As part of my continuing effort to get other people to do my work for me, I have today Ronda teaching o soto gari. She _says_ not wearing a gi makes it easier to emphasize placement of her right foot, how her leg is lifted and lifting the elbows. HA! The truth is that she is not wearing her gi in these pictures because she had just cleaned out her car, an annual event, so when she got to judo there was no gi in her trunk for the first time in several months.

By the way, for those of you who don't know Japanese, o soto gari in English is Major Outer Reap. As Ronda said yesterday, it is a basic throw but no matter how good you think you are at it, it's worth practicing and getting better because it really is a move that can score at all levels from the novice tournaments to the Olympics. 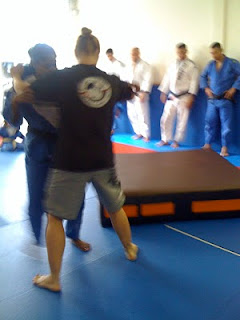 Step 1: She steps TO THE SIDE with her right foot. Not straight back. Note Ronda is doing this left-handed. If you were doing right o soto you would be stepping to the other side with your left foot. 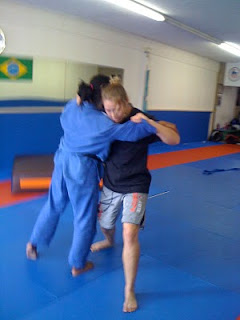 Step 2: She had me take the next picture from the other side because she really wanted to emphasize that your elbows should be UP. You are stepping into the person and pulling yourself into her. 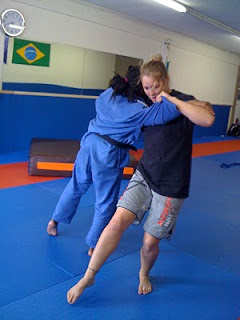 Step 3: Notice where she is in this picture. Her hips are actually PAST Crystal's. That's really important. You don't want to be reaching for the other person in o soto gari. That's a good way to get countered. Ronda said,

"Pretend you're running to kick a soccer ball. You want to get your momentum going. You're not going to run bent over with your butt sticking out."


How NOT to do o soto gari 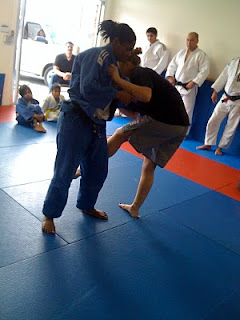 Step 4: Pick your leg UP ! This has got to be one of the most frustrating things for all judo instructors. No matter how many times you say this, you'll still see students many time each practice trying to throw someone with the left leg planted on the ground. 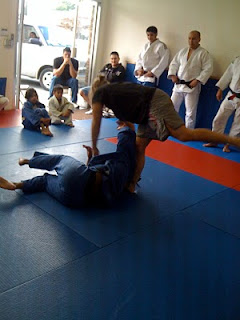 See how Ronda's leg is up in the air there? That's how it is supposed to be.  Also, she normally would have kept her arms bent and followed the opponent to the mat, but this is a demonstration and not a contest so she was going easy.

I was supposed to include a picture at the end of Crystal looking like Ronda had killed her but I did not because
a) She didn't really look all that dead.
b) Her butt looked HUGE in that picture and I was sure she would not appreciate it. Her butt is not actually huge it just looked huge in the picture. Not that I have been checking out people's butts at practice or anything. I think I'll just stop typing now before I get into trouble.
Posted by Dr. AnnMaria at 12:30 AM

Lovely sharp post. Never thought that it was this easy. Extolment to you!

This was really interesting. I loved reading it

О! This was really interesting. I loved reading it

All's fair in love and war

What a nice post. I really love reading these types or articles. I can?t wait to see what others have to say..

Lovely sharp post. Never thought that it was this easy. Extolment to you!