A Great Idea for Teaching Judo (or any sport)

I've been teaching judo for 40 years - ever since I had my YMCA membership waived as a teenager for being an assistant instructor. One thing I have learned is that all classes are different. So, although I have certain standard things I try to do with every new group - teach a forward throw, a backward throw, a pin, an arm bar, a choke, an escape - there is also variation.


I might rotate the matwork and standing practice and instruction, but this is pretty much my regular routine. When I teach a beginning kids class I don't see a point in more than 20 minutes of free practice because they really don't know much to practice yet. 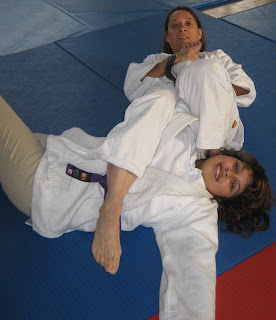 Occasionally, though, I rotate the order of the practice and I recommend you do, too. Here's why. In education, most people accept that regular assessment is a good idea. You don't go on to teaching division of two-digit numbers with remainders until you're pretty sure that your class understands division of numbers without remainders.

The same applies to judo. Just because you have taught something does not mean that your students have learned it. So .... every few weeks, I will have the free practice at the BEGINNING of class, right after the warm-up. I watch the students to see what I think are their weak points as a class. Does no one attempt a choke? Does anyone escape from a pin?

Then, I call them all together and explain that this is what I saw when I was watching them, and that is what we work on that day.

By  the way, this is also a good plan for when you are asked to teach a clinic. People generally pay more attention if they know you at least have SOME idea about the judo they do rather than giving your standard dog and pony show you've given 450 times before.

I like it. Do you have any structure for a non-beginner's class, or is that more free-wheeling? I think introducing a bit more structure would improve my instruction...

Also, I completely agree with you on using Randori to assess. There is a BJJ class before my Judo class, and one year I taught a "throw of the month" for the last 10-15 minutes of class. Basically, at the start of each month, I would ask them to "go live" from standing to see what seemed to be the most useful thing to teach (that was also low-pain from a breakfall perspective), and then teach different flavors of that technique each week. Interestingly (and accidentally), I ended up approximating the first set of the Gokyo...