Martial arts as a networking tool

I hate networking, mixers, pitching to investors,  If it was up to me, I would sit in my office, just me and my computer, cranking out code and reports and having my checks direct deposited.  It's not that I hate people. I probably have more really good friends than I deserve. It's just that given a choice between reading a really good article on regression analysis diagnostics and hearing someone talk about the best places to go on a ski vacation, I would pick the former.

That's a problem because, as Lee Iacocca said,


"Not being a people person is the kiss of death in this organization because all we've got working at Chrysler are people."

Enter judo. From a business perspective, probably the best mentor I have ever had is Bruce Toups, who was the Director of Development for US Judo back in the 1980s. Bruce and his wife, who was an extremely successful judo player, have also been very successful in commercial real estate development and have given me (and my daughter) great advice on everything from appropriate valuation for investors to being a woman in a predominantly male field. 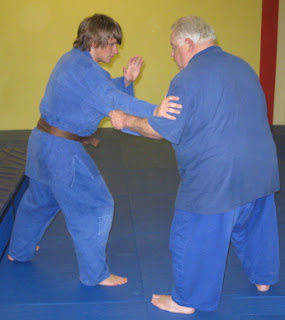 When I have needed a graphic designer, both for small jobs a client needed done with a quick turn around and for major parts of a game we are developing, I have hired Justin Flores, a world team competitor and also the son of a very good friend of mine I met in judo.

Speaking of Dr. Jacob Flores, we have worked together on a number of professional projects, where he has been our medical consultant.

I used to buy life insurance from Shag Okada from Orange County Kodokan, and when he passed away, Eric Sanchez, a judo player who used to train with my daughter often, had just started selling insurance and got me a great deal. He also provided a referral for the company that does the worker's compensation insurance for my company.

I received a contract for several thousand dollars from an organization looking for a statistical consultant. A parent of a young judo student of mine worked for them and recommended me.

The book, Winning on the Ground,  that is being publishing by Black Belt (actually AIM Media of which they are a subsidiary),  I met the editor through Hayward Nishioka, who I also knew from judo. Of course, I met the book co-author, Jim Pedro, Sr. , through judo.

Just thought I'd throw this out there, because we often think of judo as having physical benefits or character development and not as a good career move. In fact, being a statistician, I tend to think of things in terms of probability. The more people you meet, the more likely that one of them will be just that missing piece in the puzzle to help you professionally.

I know what you mean. My landscaping is being done today by a company owned by a member of my Judo club. I will always try to hire someone I've sweat some blood with over others, given the opportunity.

You and me both. I have done a lot of business over the years with people I met in judo - travel agents, clothing lines, you name it.

I have the same. Also, probably it's better for you to work with these people because you know each other and you share at least one interest