How you,too, can be awesome at matwork

The lesson for today is that Ronda is awesome at matwork and I am awesome at teaching it and how you can be awesome, too.

While we were walking down to vote this morning, we were discussing my recent blog on doing matwork to the opposite side. Ronda objected,

"What do you mean opposite side? There are no sides in matwork! You taught me that ever since I was a kid."


I agreed with her noting that she had armbarred Miesha Tate's left arm. 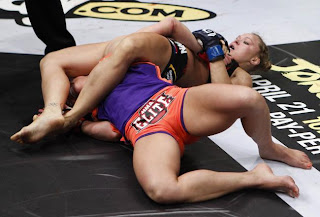 But that she had armbarred Sara Kaufman's right arm

"That's because I'm so awesome and you must be an awesome teacher because you taught me to always, always practice both right and left. You had me do everything to both sides and so now I'm always ready to catch whatever is there, which is why sometimes I get their right arm and sometimes the left."


All you people who call her a one-trick pony, hey, there are at least two tricks right there!

As I mentioned, when I was doing the opposite side day, I found it was NOT equal for me, I had to think a half-second longer on the left side. It occurred to me that since I have not been competing for a long time, or even doing that much other than teaching, I have gotten into the habit of always demonstrating on the right side. If I am demonstrating a drill and show doing ten of a technique in a minute, I do all ten on the right side.

My point, which you by now have despaired of me actually having, is that no matter how old and experienced you get, you need to constantly evaluate yourself. Even if you have good habits from the start, it is easy to get lazy or forgetful and fall into an easy rut if you are not evaluating yourself.

Why bother? It's not like I'm going to be competing again in this lifetime. One reason is because as an instructor you are a role model. If you only practice one-sided, only demonstrate one-sided, that's what your students will do. A second reason is that you don't want to get in so much of a rut that you forget.

Those people who say,


Well, that's bad that they've forgotten it. Don't be them. Be awesome.
From now on, I'm going to make a conscious effort every practice to demonstrate and drill techniques to both sides.

So .... what have you forgotten that you used to know? I'm working on a list to post tomorrow. Ideas welcome.

There's honestly too much to list. But a weird one is Tai Otoshi. I used to blast people with it, and now I don't think I've thrown it in randori in 10 years.