Which foot do you put forward?

I was talking to Jim Pedro, Sr. the other day and I may have misunderstood him because I *thought* he said that judo players stand with their dominant leg back.  Since I have a lot of work to do and it is already past midnight, I went to the massive effort of


I always fought with my right foot forward - I even checked some pictures in the hall way from the world championships just to be sure. (At first I typed "pictures from the world championships in the hallway", but that made it sound like they held the world championships in the hall at my house. They didn't. It was in Austria. My hall isn't that big. And at present it has a box with some one named Kelly Slater's surfboard in it taking up half of it.) In my case, though, even though I am right-handed, my right leg is DEFINITELY my weaker leg. In all of the years I competed internationally I could not put my weight on my right leg because I was missing two ligaments and all of my cartilage in my knee. I've since had that knee totally replaced.

Ronda, who is left-handed, fights with her left leg forward, which is her stronger leg.

Her competitor, who is right-handed, also fought with her left leg forward. 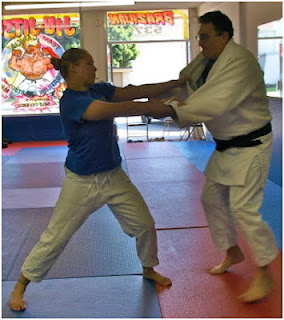 Here is a picture of her fighting Blinky, who is right-handed, and he doesn't have either foot forward.

On an unrelated note, that picture above was from a drill we ended up not using in our book. We originally were going to have more than matwork but it just sort of evolved into Winning on the Ground. I do not know when it will be out but I will email our editor and ask since I am feeling completely virtuous as I know that I have now done every single thing I need to do for  the book and it is now completely someone else's job.

Email ThisBlogThis!Share to TwitterShare to FacebookShare to Pinterest
Labels: standing

I would have to re-check the video series that Jimmy Pedro Jr and Dr Rhadi put out, but I'm almost certain they recommend standing with one's strong side forward. Right-handed fighters, thus, would stand with their right legs forward. I know this is definitely the case in wrestling, but the opposite in boxing.

But, in my case, although I am right-handed, my strong leg would DEFINITELY not be the one I had several operations on.

Are you REALLY going to force me to call you "exceptional" (again)?