What it Means that Ronda Rousey is on BlogHer

There has been some talk about Ronda being an MMA star going mainstream, after the ESPN body issue and the Conan O'Brien show.

Let me add another data point - BlogHer featured Ronda Rousey on the front of their sports page today.

For those of you who just said, "Huh?" that is my point.

According to CrunchBase, BlogHer has a readership of 40 million WOMEN each month.

Site analytics rates them as number one in their category, women's social media.

You've probably noticed that mixed martial arts draws primarily a male audience.  I can guarantee you MMA flies under the radar both for women and for much of the general public of both genders. My last post featured on BlogHer was about why Nate Silver, the guy who predicted the last two elections so well, is a hero to statisticians. 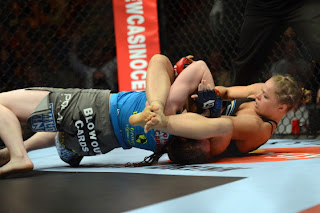 I received a nice invitation from them to write a post for the front page of their sports section, that said, Hey, we realize you usually write about start-ups, small business and statistics but since you are Ronda's mom maybe you could write about how likely it is that you think she will be signed by the UFC.

Judo and other martial arts are so low in the priority that they didn't even realize I wrote this blog - and it is one of the 3,000 blogs in their network! Far fewer people read my posts about how to do an armbar than the ones on how to interpret a regression analysis.

BlogHer held this post to go up after the election coverage, but I wrote it a week ago which just goes to show that Nate Silver isn't the only statistician who can get his predictions right! (They had to edit it from future tense before it was published!)

BlogHer features stories they think are of interest to their audience - politics, parenting, soccer moms, relationships, romance novels, recipes - and now Ronda.  The last post featured on their sports front page was about a nine-year-old girl who is a good quarterback.

What this implies is that in their view, the story about Ronda in the UFC was a story of interest to WOMEN, primarily women over 25 (their readers).  Not surprisingly, sports marketing research finds the average MMA viewer to be young and male. If the UFC could attract women aged 25-44 to watch in anywhere near the proportion they get men 18-24 viewers - well, that is yet one more reason having Ronda Rousey in the UFC is good business.

Nice regression explanation too! Although I expected you to use a leverage statistic...

Well, Patrick, the regression post was on baby steps. But you are right, a follow-up post on diagnostics would be good.

Sorry - it's just a bad pun after a long electoral season... (although I have to admit it made me think about a problem with some data analysis I've been working on - and a different way to think about considering an outlier of sorts who likely had an electoral impact).

I will be looking forward to your post on diagnostics!!