Why You Are Not Winning: What I Learned from a Nobel Prize Winner

Do I believe that the race always goes to the swift or the battle to the strong? Not always, but that is sure as hell the way to place your bets.

Here's another way - on the person who trains the hardest, who is very, very, very often the one who ends up strongest and swiftest.

I was visiting a club once after a major tournament and the instructor was telling the players how proud he was of them, that they had done so well and they trained harder than any other club in the country. That was a lie on two fronts. First, as I heard another visitor mutter under her breath,

"They couldn't have done all that damn good. None of them won."


Second, if they really trained harder than every other club in the country, then WHY did none of them win? What were those other players doing that they weren't? Did they just all have naturally gifted athletes walk into their clubs?

Let me tell you a few things the winners do that you don't.

1. They train every fucking day. They don't take off because it's Tuesday, they have a cold, their hand hurts, they have a test tomorrow, it's their grandmother's birthday. They might take off Christmas, the day after a major tournament. They might even take off one day a week, if they worked out at least twice a day the other six days. They train twelve times a week and you don't.

2. When they are at practice for an hour and a half, they fight for an hour. You don't. You tell me you train really, really hard. Yet, you show up to practice late, spend 20 minutes getting dressed and taped, talk to your friends, your coach, the parents of other players. You spend another 20 minutes doing warm-up exercises. You go a few rounds "really hard", and that's it.


If you find yourself the toughest person in the room, then you need to find a different room.

HOW NOT TO TRAIN

Let me give you an example that I see all of the time - someone comes into a club late and spends fifteen minutes warming up then grabs a player who is smaller, younger or old and out of shape. They throw that player around or maul them on the mat. They do that a couple of rounds. Then, they go with someone about their size who is in good condition who has already done several rounds of hard randori, having actually gotten to practice on time. They fight this person like it is a tournament except for any rules that might be inconvenient, being as defensive as possible to keep from getting thrown or pinned, ignoring it if they are about to go off the mat, if there is a rule against holding on one side the entire match. If you have ever once said,


Then YOU are an idiot (or, hopefully, a recovering idiot).

You can't beat people in practice any more than you can get an A in field trip. You have missed the point.

Where did the Nobel Prize come in? In an article on advice to young scientists, James Watson said,

"Never be the smartest person in the room."


His point was that if you aren't the smartest person there, then you can learn a lot from the other people. 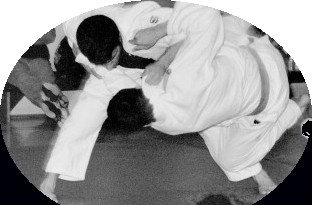 When Ronda was 13 and 14 years old, we used to go down and visit my friend, Dr. Jake Flores, quite often. His son, Justin, was probably 18 years old, three-time state wrestling champion, national judo champion and about 25 pounds heavier than Ronda. He was definitely the toughest person in the room. One day he said to me, mostly joking,


"AnnMaria, what is wrong with your daughter? Everywhere I go, half the guys in the room don't want to train with me, and here she is every round in my face, asking me if I want to go again, I can't get her off of me. She's like a little tick."

Could she beat him? Hell, no! She was a skinny kid, barely a teenager. He threw her, pinned her, choked her and arm barred her at will. She wasn't much of a match for him at all - then.

Never be the toughest person in the room.

Email ThisBlogThis!Share to TwitterShare to FacebookShare to Pinterest
Labels: training

Agree.....There is no excuses for not working hard or harder than anyone else. However, you could do all the right training, challenge yourself at every opportunity, train longer, and harder than anyone else and still come second (or third or fourth). Sometimes the competition gets the better of the competitor (some people are just better at training than competition....)

That is true, but it is not the general trend. Usually the people who train the hardest and longest win.

I find many of your posts quite inspiring. It is not that this made me feel guilty (I do not find guilt to be the best motivator) but it made me make a fair assessment of myself and my training habits. I have been stepping up my training but do not pretend that I am training as hard as I can or that I do not make excuses but I also accept the fact that I simply have not made training the top priority. It is high on the priority list but for now it is behind family obligations, work, and sometimes other recreational activities. I know that if I want excel in the sport/competition I really need to step it up. That does not mean putting it ahead of family necessarily but it does mean training harder, with more people, and cutting back on my sleep in the mornings and going to the gym instead.