Liz Carmouche in the post-fight conference said she thought she'd try knocking out some of Ronda's teeth and hope she could get her to tap. Of course, that did not happen. Although I don't blame Liz for trying, it illustrates what I've always said.

Techniques that just hurt your opponent but don't disable them through making them unconscious or dislocating a joint won't work on the really elite players. They WON'T tap just because it hurts. They will put up with the pain and when either they escape or the referee separates you, they'll just get even.

I think most women can relate to this story... I knew a young woman at the fight who had an awful ex-boyfriend who was a huge MMA fan. To further rub in the fact that he should not have been such a jerk to her, she wanted to get pictures with people like Chuck Liddell, Dana White, etc. I am not so much an MMA fan as a Ronda Rousey fan, but the seats in the front row have names on them. So, several seats for Ronda's family will have her name, and these seats next to us had Chuck's name. So, I asked him if he was Chuck Liddell and said,

"Hey, are you Chuck? I'm Ronda's mom. Would you mind taking a picture with this young lady?" 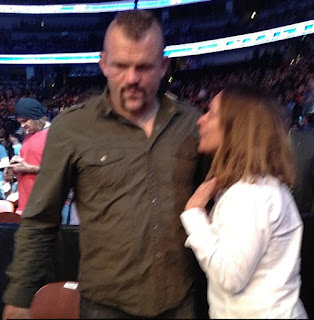 It turned out he was Chuck and no he did not mind but for some reason, my oldest daughter thought that was hilarious.

Did you know that Joe Rogan even broadcasts between the fights? I now know that because I went to ask him to plug in my cell phone and charge it up but he was broadcasting a fight. 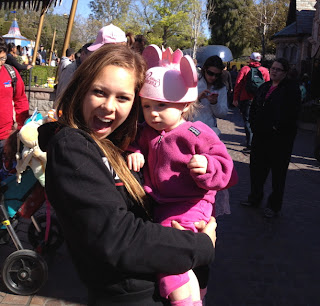 My daughters also thought this was hilarious because HE'S JOE ROGAN which meant less to me than if he was Bob Rodriguez (president of the American Statistical Association, just so you know). However, since my youngest daughter was sitting with her friends and not under my watchful eagle eye and my grandchildren were with a babysitter I wasn't taking any chances on not being able to be contacted. 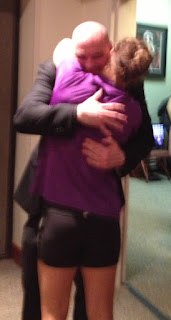 My second daughter, who is even less up on MMA/ UFC personalities than I am (apparently, that is, in fact, possible) kept pointing at random bald men in suits saying,

"Is that Dana White? No? How about that guy?"

When he showed up after the fight and gave Ronda a hug, her sister muttered under her breath,

"I don't know why you guys laughed at me. He looks like every other bald, white guy."

And as far as arm bars,


Shameless plugs section  - you can find more cool stuff like this in the book from me and Jim Pedro, Sr. WINNING ON THE GROUND

Ronda Rousey is my favorite fighter She is a lion in a humans body! I hope I get to meet her one day

As the seconds ticked away at the first round, the only thing I was thinking was "please please please keep the streak alive! Pull the opposite elbow!"

Glad to see that your family had a great night at the UFC. It certainly was a fun one to watch from the house. Best of wishes!

Another great post. I am a huge fan of you and your daughter and love your thoughts on her fights. That bent arm bar from kesa gatame is my favorite submission and I would have loved to have seen Ronda defeat Liz with it. However, I love even more the fact that Ronda didn't let Liz off that easy and instead chose to further weaken her already discouraged spirit ( Liz cranked on Ronda's face with all of her best and Ronda ate through it and shook her off.) pinning her for a while; completely shattering said spirit, utilizing the very submission we knew Liz was worried about. For all of Liz's strength and face cranking, Ronda overcame and broke her with superior technique and that little tap from Liz said it all. I, myself am also glad Ronda made that decision. THAT was getting even with and surpassing Liz.

Ronda is just too awesome. No one can beat her.

Dr. AnnMaria - I wouldn't normally ask this, but I'd love a sound-bite: He was critical of her crossing her ankles when she applied the juji gatame. Any comment?

As we said in our book about a dozen times - if it works, it's right. So, I'd say crossing her ankles is perfectly fine.

I love even more the fact that Ronda didn't let Liz off that easy and instead chose to further weaken her already discouraged spirit ( Liz cranked on Ronda's face with all of her best and Ronda ate through it and shook her off.) pinning her for a while; completely shattering said spirit, utilizing the very submission we knew Liz was worried about.
UFC 158: St-Pierre vs. Diaz

I admire you for raising such a wonderful talented and beautiful daughter..Not only is Ronda now the world champion but she has become the the true ideal of a honorable woman in today's world.
Much love from the Philippines!
Dennis Villegas

A man can get discouraged many times but he is not a failure until he begins to blame somebody else and stops trying. See the link below for more info.