To escape from kesa gatame - called a scarf hold in judo, and a head and arm hold by some other people - one way is to turn in toward your opponent, on to your stomach. Hopefully, you follow that with backing up on to your knees and then attacking your opponent.

A really, really key point that Sergio and Marcello here are demonstrating is that you want to start the escape BEFORE your opponent completely has you in the pin. 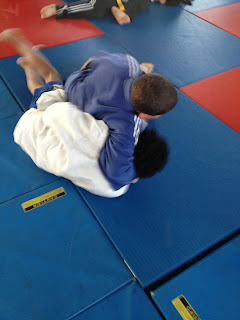 I was discussing this with Jim Pedro, Sr. one day and he said,

I'd really like to see, when I was in my prime, if I was squeezing your head, how you would get out of there.

And he's right. If your opponent has you pinned, the truth is NONE of that stuff you see in all of the Kodokan Illustrated and other judo books really works. {I said that and God did not strike me dead. See, I'm still here. Typing.} 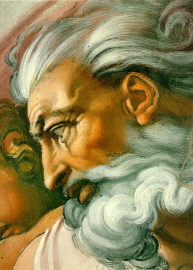 Like a lot of things Jim argues with me about, his answer is right, but to a different question. You want to escape BEFORE you get into the pin. Look at the picture below. 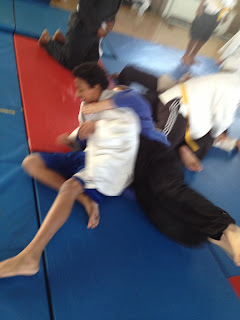 Even though Marcello threw, he doesn't have the pin perfectly locked in yet,  and Sergio is on his side. THIS is the time to try to get out. Four things I want students to know when learning an escape from kesa gatame:
Isn't this like escaping from being mostly pinned? Yeah, maybe, like in Princess Bride where he was mostly dead.

Not coincidentally, the first three of those things I want students to learn can be learned from a shrimp crawl, also called ebi in some judo classes (because that is the Japanese word for shrimp - you really want me on your team in Trivial Pursuit), and a hip escape by some people. See shrimp crawl video below.

There is a lot more in our book,  -
Winning on the Ground, which is now out as an ebook for
Kindle here
and Also available for the Nook here
and for other e-readers at Kobobooks

It will be out in paperback in March.


Completely unrelated to this post ... my company is doing a Kickstarter campaign for a game that will replace math. If you have no idea what that means, go here to find out.

So in other words, an ounce of prevention is worth a pound of cure... or perhaps more than a pound if the disease is fatal.