Falling Really Isn't That Important to Me

First of all, in response to some of the comments in the blog I wrote recently on What Do You Teach First, I never said that I DON'T teach falling.  In fact, I said that I spend 10 or 15 minutes on it the first day of class and 5 minutes or so every class after that. So, I do teach how to fall and reinforce that teaching almost every practice. For someone to be a good judo player, he or she cannot be afraid of falling and everyone is going to get thrown at some point, probably at several points in every practice.

What I DON'T agree with is the old-fashioned way of spending two or three weeks or more just having people learn falling. I have heard various justifications for this,

"We want to make sure the students were serious about learning before we waste any time teaching them."

"If you don't know how to fall, you can get seriously injured, so we don't start the students on throws until we are satisfied with falling."

"Falling is the most important part of judo and the most difficult to teach."

I think all of those are wrong. Students shouldn't have to PROVE to you their worthiness to learn judo, or anything. If a person comes to me and wants to learn statistics or judo or any other class I had agreed to teach I think it is being an arrogant jerk to first make them go through some ritual to prove they are worth my time.

The second justification is true in some cases. If you don't use a crash pad and students are going to be thrown hard from a standing position in free practice, then yes, you probably have to teach them to fall well first. Personally, I have them do throws from their knees when they are doing matwork in the first practice. I also have them do throws on the crash pad. 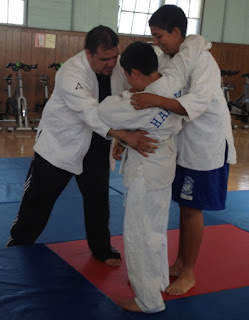 At Gompers Middle School, I pretty much start each year with a fresh class of beginners. At other programs where I have taught, if I have more advanced students, I would let them new students work out with them and have the advanced player just defend. Either way, a new student gets to throw and pin someone on day one, that's why they are there.

The whole most important, most difficult to teach part I don't really get. Sylver and Chad both made a great point in the comments on the last post, though, that LOTS of people never get in a fight where they need to throw or arm bar someone but everyone falls down. I've fallen down ice-skating, biking (when some idiot ran across the bike path), roller-blading and who knows when else. So, they do have a point. If you define important as "likely to use outside of judo", then okay.

The most difficult to teach? I still don't get that part.

Indeed, when talking of ukemi, I always understood "most important" to mean "having the greatest impact/consequence in the person's life".

For the most "difficult" part of the statement, I suspect it is an exageration to "sell" the importance of ukemi. After all, kids seem to pick up basic ukemi skills within a week, it can't be that difficult to teach at a basic level.

At a high level, it's like everything else, I guess. Raise the bar high enough and it becomes next to impossble.

Either that, or Ukemi is thought as including a lot more than just falling.

There are more than a few ideas about Ukemi. I think it is age dependent when it comes to pedigogy....to say nothing of different arts & different emphasis. Kids pick it up quickly, adults are often scared shitless to roll or fall as beginners.

I believe that to understand a technique one must feel it and have the ability to withstand it. This is what I emphasize with adults. Hence to seriously train learn Ukemi!

Kids do great with sasumi (sacrifice throws) ...it teaches them a certain complexity, strategic thinking with respect to falling. Their lack of fear make them very compitant once they know how to think through the set up.

But At the end of the day is any skill more important than other skills when training? Therefore, the more skills one can incorporate per an exerscize the better the time spent in a class. I will go on record here as saying especially with kids I do not do warm ups, which I consider a waste of time. I would rather have them go through techniques, albeit maybe slowly, than waste time on pushups.

Falling is the same, i.e. falling with a partner with the right emphasis can be a lesson in throwing simulteneuosly.

I'll have to go with dsimon here. I'll go even further and say with young enough kids, falling is almost irrelevant. Certainly you can focus so much on falling that instead of relaxing them, you make them tense up. It's very, very much age dependent.

The point about warm-ups is interesting. I started at the beginning of the year doing exercises just to get the kids in shape. Now that they know some judo, that's not a bad idea to switch to something else like uchikomi.

When Ronda was young she HATED running. So, I'd have her do speed throws on the crash pad for conditioning.

Because at the end of the day the biggest limitation is time (one could get philosophical here haha)...whether it be the time that children can focus on an activity, the time that adults have to spend in a class....maximizing class time is imo very important. For years now I tell my students to exerscize regularly at home and thats what I do so I can be tossed around at the tender age of 48!