Behind the Scenes of Winning on the Ground: Part 1 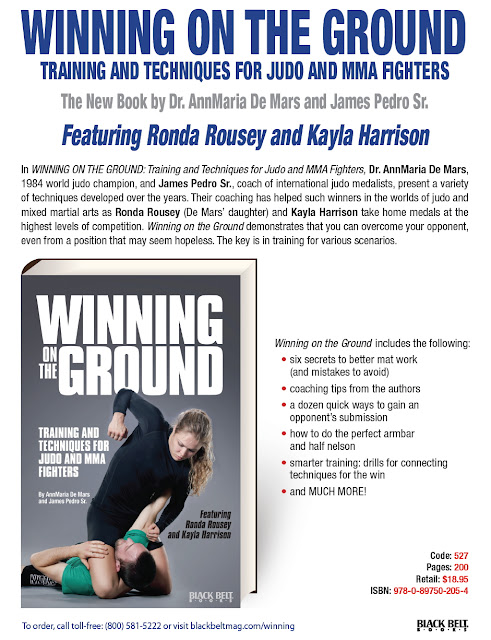 You can read all about the Kickstarter campaign for an adventure game here. Go to the posts section to read what it has to do with Ronda.

1. When we shot that cover photo, Travis (the guy on the bottom) kept almost passing out. It's a really tight choke. The photographers, as you can tell from the photos in the book, were real professionals and kept wanting to take multiple shots. Every few seconds, he would start to turn red (you can even see it in his face on the cover) and then blue. Finally, Ronda said, "Just tap when you feel yourself about to go unconscious and I'll let you up and we'll re-set after you get to breathe." That's why his hand is on her leg, so he could wait until the last minute so they could get as many shots as possible in without us having to revive him.

2. There is really no need for the striking in the photo. She already has him in an arm bar and a really tight choke. Ronda, the photographers and I had been arguing a lot that day and she was so mad she wanted to punch somebody, so in several of the pictures, with both Travis and Crystal she threw in some gratuitous punches.

3. We had to shoot the escape sequences over. Ronda HATES to lose at anything, so much so that when we did the escape sequences, she kept grabbing Crystal when she got half-way out and dragging her back. See photo of Crystal below NOT escaping as evidence. We finally had to switch positions and have Ronda do most of the escapes. 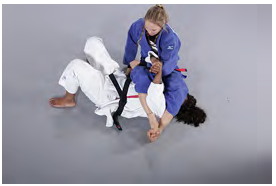 4. One of the escapes in the book is missing the last picture because we didn't notice until we were ready to go to press that Ronda had grabbed Crystal again at the last second to prevent the escape. She did it so fast and at the very end of the sequence. So, we just said something in the text about how you would keep turning out, since we couldn't really end the escape with a photo of Crystal being practically nailed to the ground in a pin.

5. Crystal actually did escape one of the pins and Ronda had the most perfect WTF?!! look on her face. Both Crystal and I were sorely disappointed that shot did not make it into the book. We still suspect Ronda threatened the photographer afterward.

6. Yes, the arguments. The photographers from Black Belt were amazingly good, as you can see from the book. The flip side is they wanted to do every shot from three different angles (at least!) and both Ronda and Crystal were losing patience. They kept asking me why I didn't tell the photographers what to do, since it was my book. The answer is that I am mature enough to realize that other professionals know their field better than me so I was not going to argue with them on that score.

7. The other arguments. It is no secret that Jim and I argued over just about everything in the book. Several people said to me, "You don't have to listen to him, it's your book." I am sure his people on the east coast said the exact same thing to him, in reverse. The truth is, it's OUR book and if he wasn't happy with a section, then I worked on it until he was because there is no way I would have finished it without him. I just have too many other irons in the fire. He also rewrote several sections because they weren't clear to me. As I told him, if I know you and I know a fair bit of mat work and I don't get what you're saying here then odds are great that the average person won't either.

WHAT ELSE WOULD YOU LIKE ME TO DISH ABOUT?
What I really think about Cyborg?
Who I think Ronda should fight next?
Judo versus wrestling versus BJJ?
Corruption in Olympic politics?
Untold Ronda stories (I'd have to clear these with Ronda first).

Vote in the comments below and when our Kickstarter hits $20,000 I will tell all.

Shameless plugs section
- you can find more cool stuff like this in the book from me and Jim Pedro, Sr. WINNING ON THE GROUND

Email ThisBlogThis!Share to TwitterShare to FacebookShare to Pinterest
Labels: writing a book

I would be curious about the Judo vs BJJ aspect of things, though I suspect you might just say that BJJ is a misnomer and that we're all practicing Kosen Judo without realizing it... but that's me.

You underestimate my interestingness. I am crushed.

I would like to hear you discuss judo vs wrestling vs bjj.

I'd also vote for Judo vs BJJ vs wrestling.

Another thing I'd love to read your take on is statistical analysis in sports (for instance, advanced metrics in baseball vs traditional statistical models) and how that could be applied to MMA or Judo. Or whether it even could be applied in such a way as to achieve data that would provide usable information.

I know this isn't exactly gossipy type of stuff, but I would be interested in your take on newaza "rules" or guidelines. What do you consider to be the key principles/concepts applicable to newaza.

To illustrate what I mean:
"Use frames instead of strength"
"When in someone's guard, don't move your hands and arms past the belt"
"Don't try to choke someone from the guard".
"Keep your posture".
"Move before things go bad instead of trying to escape after the fact."
"If the position isn't right to do a technique, don't try, move first"

I have found general principles/guidelines like these to be very useful, more so than specific techniques, so I would be VERY interested if you could cover more key concepts or discuss the limits/exceptions of specific guidelines.

Awesome! I would also be interested in a good statistical analysis of MMA/Judo competitions.

By the way, did you know there is a nice set of stats for judo courtesy of the EJU http://www.eju.net/news/?mode=showNewsItem&id=1823 based on the last OJ and split between men and women?

One can find interesting things like for instance the fact that (men & women combined) 22% of all attacks resulted in a score, with men attacking about 20% more than women. Kosoto Gake is the technique the most likely to score when attempted, and interestingly enough, O Soto Otoshi seldom results in a lower score (6 out of 9 score were Ippon)

Unfortunately, with data from a single OG the results aren't actionable, but I would be really interested in a study of this nature if it could be done with large enough numbers to reach statistical significance. Nort sure it can be done properly, though considering that rules change from one OG to the next (The last OJ had 550 scores from Shido which are no longer possible) but

yo Doc!
Can you confirm or not whether your daughter beat Vic Darchinyan in a fight?

I can't confirm it. She's beaten a lot of people and I don't know nearly all of their names. Sorry.