Are You Tough Enough? 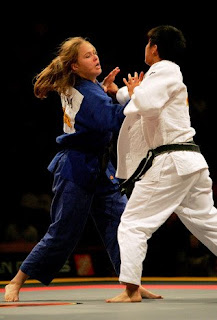 Yesterday, I said that I was going to talk today about developing an individual athlete's matwork. Well, there has been a change of plans.

It is a cliché to say that winning at the elite level is 90% mental. If that is the case, how do we make athletes mentally tough?

The answer is that we push them out of their comfort zone. I have been told often that I am too rough and tough when I work out with young athletes. This is insane. I am 115 pounds and almost fifty years old. My first grandchild is due any day now. Are you SERIOUSLY complaining that a 115-pound grandmother is too tough for you to fight? And you want to go to the OLYMPICS? In what sport? Is petting bunnies an Olympic event now?

Yes, I was a world champion, but come on. Do you really think that someone's grandmother could go into a wrestling or football practice and make the athletes whine by working out with them, I don't care what she was back in the day. If that is the case, then your team needs a lot of work.

I want to point out that there are a whole lot of people I work out with who are not whiners and give as good as they get. Here is another point - I don't know how much longer I can do this. I am a little person. After I work out for several hours, the next day, I feel like I have been run over by a truck. Unlike a lot of people who seem to want to be running everything forever, Ronda can't move back home and pitch in soon enough to suit me. The reason I push these kids is because having to fight back, having their faced pushed into the mat when they lie on their stomach and hide in matwork will make them turn and fight. Now, when it happens in a real match, they won't expect the referee to save them from unnecessary roughness.

They will expect to save themselves!

This is what I want for the athletes I coach, both on the mat and in life.

This is the first step. We need to DRAMATICALLY increase the level of physical toughness we expect from our athletes. My youngest daughter came up to me at practice to complain one day that she had a small cut and something was bleeding. Before she finished, she turned away and walked back to her group for randori saying,

A good coach, as well as any honest athlete, knows the difference between the bumps and bruises that are a part of training and actual injury. You don't train through injury unless maybe it is your last shot at the Olympics or world championships. On the other hand, if someone stepped on your foot, accidentally bumped heads or ground your face into the mat, you don't whine, cry or sit out a round.

Here are some realizations that come with mental toughness.

1. No one is going to save you. We don't allow bullying at the training center, but we do allow people to get thrown hard, to have someone put all of their weight on them in matwork, to twist them into uncomfortable positions. If it hurts to be in that position, get out of there.

2. Accidents happen. Sometimes people bump heads, they try a foot sweep and accidentally kick you in the ankle. It doesn't make them evil people. The more rounds you go with hard people, the more likely one of them will come in hard and miss, accidentally smacking you in the eye or knocking you to a knee. You won't die. Unless it happens from the same person a lot, I probably won't even yell at him or her. Accidents happen, it's nobody's fault. Just move on.

3. Sometimes people are better than you. People will throw you, pin you, armbar you. It is not always a cheap shot, bad judo, they out-muscled you. Sometimes they are just better. Walking off the mat and trash-talking them gets you no sympathy. If they really are cheating, it has a way of catching up with you. They won't be around long.

4. No one has the right to beat anyone. "Better" is not a permanent condition. Athletes who want to get on top know this. Athletes who want to stay on top know this. Going to other clubs, to camps and to places like the West Coast Judo Training Center is good because in most dojos people have a comfortable hierarchy. It has been established who can beat who, we all kind of agree to get along. When you come to some place new, it's not like that and you have to earn your place all over again, sometimes every day. Hey, just like a tournament! You don't get to start every match with a koka just because you were last year's national champion.

How do you build mental toughness? Lots of rounds of randori with hard people who push athletes a little further than they think they can go. As I mentioned yesterday, development is gradual. I may go 85% with an athlete this week, 90% next month and 95% the month after that. When I am going 100% and still can't push that athlete then maybe he or she needs to go in a group of heavier players like with Tony Comfort or Eric Sanchez.

The best people to push developing players are often those who have just retired from competition. They are fast enough, in good enough condition and skilled enough to make young players work hard just to keep on their feet or off their backs. At the same time, those who have just retired are not competing with up and coming players, and, I have found, they usually honestly want to pass on their knowledge and help the next generation.

I think I may just set up a recruiting station outside the Olympic Trials in Las Vegas, with a sign saying,

"Did you decide to retire from competition after this tournament? Sign up here to help us build a generation of champions."

We underestimate this MTV generation a lot, I think. They have a lot to offer and we need to put them to work developing the younger players coming up behind them into a generation of champions.

How do you get tough enough? People who care about you help you get that way. You never, never, never give up.

P.S. A note on crying: I've never been one for crying. Ronda, on the other hand, cries if it is Thursday and her uchimata doesn't work. Some people think crying is terrible and against the spirit of judo. Ronda says to think of it like a face leak. If you're one of those people who cries easily and can't help it, I wouldn't worry about it. When I was at Venice Dojo, I had a five-minute crying rule. Anyone could go off the mat and cry at any time for any reason - but no more than five minutes out of every practice. If you practice 85 minutes and cry for five - so what.
Posted by Dr. AnnMaria at 11:02 PM