Future Olympic Greats: Why No One Appreciates You 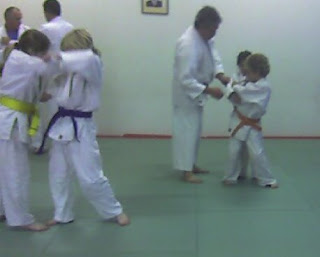 Those adorable children on the right represent the next generation to grow up thinking I am a mean old woman.

Whether I actually am a mean old woman is a subject open to debate, but if I am, it is not for the reason that some of our "future Olympic greats" think me and my colleagues are grumpy old men (and women).

Have you heard these lines:

Talent like yours comes along once in a generation.

You train so hard and sacrifice so much, you shouldn't have to work for a living, these judo organizations should be supporting you so you could be competitive against those other countries.

It's a crime that you have to pay your own travel expenses! You should have a sponsor. Someone should go out and get funding from corporations for athletes like you!

I'll guarantee you didn't hear any of those lines from me. Why not?

Very likely, you hear that kind of stroking from people who are not at all objective. These aren't always evil people. Quite the contrary, they may include your girlfriend/ boyfriend, your good friends on your judo team - and yourself. Everyone likes to consider themselves in the best possible light. That's very normal.

On the other hand, there are people who are blowing smoke up your - uh - judo gi - because they have an ulterior motive. They want you to vote them into some judo office, change to their club and let them coach you or support them for a position coaching some national or international team.

The poet Robert Burns (yes, I have read poetry once or twice, usually against my will) wrote

Here is my gift to you ... how I see the "Future Olympic Greats" in judo who get pointed out to me at every junior national, regional and senior national tournament. I think I speak for a lot of the "uncaring old people" out there.

Unlike your mom, the person who wants to get with you after the tournament or that guy that wants to be your next coach, I have zero motivation to be anything but objective. I have been around a very long time. Talent like yours probably comes along on a fairly regular basis. Have you set any track records? How about in the bench press? Is there any data to support your belief that you are a great athletic talent? You won the junior national championships? Three times? That's very nice. There are about 100 divisions in the junior nationals. There are five or more junior national events each year. Even if you consider that some people win two or three of them, that means that you have 300 or so junior national champions EVERY YEAR, often in divisions of less than ten people. Are you really talented beyond all others? Here is a simple quiz:

You're probably a reasonably nice, intelligent, hard-working person. That doesn't make you one of the greatest talents of our age. An enormous amount of effort and sacrifice does that, on your part and from those that care about you.

How much do you really sacrifice? How many times a day do you work out? How many tournaments do you compete in each year? How many training camps do you attend? Do you own a car? Have you taken a vacation in the last two years?

Here's the deal -- I have seen a thousand people like you come and go. I am a little sad for each one that doesn't make it. However, if you can't find a way to train twice a day, you can't compete in local, regional, national and international tournaments, you can't make it to training camps - then why do you expect other people to sacrifice to give their money to you?

A mother yelled at me once,
"You have no right to talk to these kids like that! You have no idea how hard they train."

On the contrary, I know exactly how hard people train. It is evident watching them at practice and watching them compete. If you are dying out on the mat after 10 minutes of randori, it is quite obvious how hard you train. If you can't take it if someone who is flat better than you throws you over and over or turns you every way but loose and you give up in a fight, it is evident how hard you train.

Jim Bregman - world and Olympic bronze medalist - laughed as he said to me,
"All of these young people say they cannot win because they don't have the money to train, unlike the briefcases full of money you and I had when we were competing."

Jim's family saved up for one plane ticket to Japan. He stayed there for years and supported himself teaching English. I went to Japan as part of a Study Abroad program with my university.

One of the annoying things about my husband is that he has every Simpsons episode ever and has played them until he has memorized every word. The Simpsons are unavoidable in our house and every possible incident from the birth of our child to the death of a pet reminds him of a Simpsons episode.

It has worn off on me, for which I will never forgive him. The Simpsons episode you bring to mind, my young future Olympian was on the topic "Let someone else do it."

A few years ago, two young men accused me of being a bad person because I would not write grants to get money for them to travel. At the time, I was doing fairly good business as a grant writer. I was speechless. Now that I have recovered my speech, let me give a brief explanation of how things look to my generation.

"You are not my child. I have children, who I dearly love who I intend to put through college, send to summer camp or buy a new computer. I have friends. I have a job at which I make the money you think I should spend on sending you to France rather than going to the Bahamas with my family. You don't live in my state. You will probably never contribute to judo in any way that affects me personally as far as opening a club in my area, holding a clinic to teach kids or helping out in anyway. I am not sure why you think individuals around the country or corporate sponsors should give you money.Your attitude about sacrifice seems to be, -Let someone else do it. You should give up the money you made and give it to me. From your point of view, if I cared about judo in the U.S. I would give you money so you can compete internationally. Since you haven't placed at the last five international tournaments, in fact, since you haven't gone past the second round, I think I will spend the money I have set aside to help judo teaching transition to newaza at a camp in Rhode Island. It's my opinion that activities like that might increase the number of people in judo so that eventually you have to beat 50 people to win your division at the junior nationals."

I care about judo. I just don't care about you. I have seen a thousand people like you come and go. After a while, you quit getting attached to them, out of sheer self-defense.

You know who does care about you, though? Those mean coaches who are yelling at you to train harder. You should listen to them. And maybe, just maybe, you will become that one-in-a-lifetime talent. When you do, look me up.
Posted by Dr. AnnMaria at 6:36 PM

Thanks for sharing again!

Everyone young wants things fast. And most Americans want it fast and easy. That's a lot to overcome.

I walk a fine line of trying to convey these very sentiments to a lot of BJJ and Judo players that I meet, that want a handout, but aren't willing to work that hard really. And finding how to balance this message of "there's a hundred other people that are willing to work even harder" and that of "you can do X if you are willing to pay Y. You have all the potential in the world with the right mix of smart and hard work." is delicate.

In the end, I'm trying to learn how not to look down on people who won't come to a 6am practice, or won't pay to get a strength coach, or won't attend an optional nage waza practice. At least on a personal level; trying to figure out how to still be friends with people in some ways... I just don't respect. That makes us sound mean. I am not even that old. I'm just over the prima donnas.

I don't look down on those folks. Those are the choices they made. I have two daughters older than Ronda who made the choice to purse their educations and careers and not make the sacrifices that Ronda does for a sport. There is not a thing wrong with that. I have no problem giving them money to go to college. I am just not going to pretend I think either of them are going to win the decathlon this year nor am I going to give them money to attend decathlon camp in Spain.

There is a Bob Dylan song that goes:

You give something up for everything you gain,
So pay for your ticket and don't complain

In high school, Maria told me, "I know what it takes to make the Olympic track team and I don't want it that bad."

She is off to a great career in journalism. In part, I think, her success is due to her ability to be honest with herself.

Jenn, who is 13 months older than Ronda, has no gold medals, but she has a bachelor's degree, two jobs and made the Dean's List her last semester of college.

I respect my older daughters plenty. I think one of the things I respect about them is that they are fully aware of the choices they have made and honest about them.

it is quite obvious how hard you train