You Need to Change Your Focus from "Not Losing" to Winning 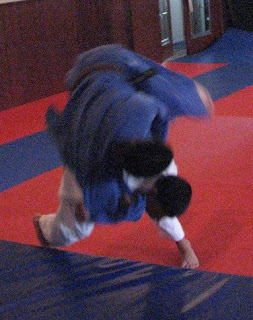 I had a long talk with Jim Pedro, Sr. yesterday. Since I am working on the West Coast Judo Training Center website and drinking cognac, I am too busy to write much today, so I thought I would just repeat here one point he made that I thought is probably really important for a lot of players and their coaches.

(Too busy, not too drunk. I didn't have THAT much cognac. Dennis drank most of the bottle. He says he feels no guilt about it, either, since he was the one who went to the store to get it, he paid for it and he brought me the glass upstairs while I was sitting at my computer doing "judo crap" as he so lovingly puts it.)

Jim was talking about one of the players he used to coach, who was a very successful competitor around my age. Let's call him Bob, because that definitely was not his name. Also, because if you spell it backward, it's still Bob. He said,

"You know, Bob would win all the local tournaments, throw everyone in randori and when he was younger he just could not win the junior nationals to save his life."

"And when he was in competition would he attack all of the time but he often came in too far away and did not pull it off the way he did in competition?"

"Yes, you remember him that well?"

"The light went on one day when he was fighting some kid in the finals, someone who was really good, and he came off the mat and said, 'I only lost by a koka.' I was a pretty young coach back then and a lot of this was new to me, not like now when I have spent thousands of hours watching matches, and I grabbed him and said, 'You're playing not to lose. It doesn't matter that you lost by a koka. You lost. You didn't throw him because you were bent over and trying not to get thrown.' Now here's the thing - my kid back then and your kid now are not attacking in the match to throw, they are attacking not to get thrown. That is smart defense and it will keep them from getting a penalty, which is what a lot of defensive players get, and it is certainly better than not attacking at all. However, it is just that , defense. He may not realize it but he is fighting not to lose. If he was fighting to win, he would be extending on his seoi nage, not just underneath with the person standing over him."

"Well, come on, AnnMaria, it's not like it is a one time fix. I didn't have a talk with him and he was suddenly better. Some people fight that way their whole lives. You have to tell him that it is not winning and losing to focus on when you are young, it is doing things right. Talk about extending on his throw, throwing for ippon, scoring on the opponent and that is what he needs to do. Tell him to forget winning and losing for now. If he is kind of a macho kid, saying he needs to not be afraid to lose will hurt his pride enough to make him go out and take more chances. That is what it is all about you know, a sense of pride, not wanting to let your parents down, your coaches down. Change the meaning for him, it's not about winning or losing it's about scoring on the guy. It is not once you need to tell a person this. It is over and over, before every tournament, maybe even before every match. The good news is that he has the technique, the conditioning and the heart. You just need to change his focus and he's there."

thanks again for sharing.

I feel like I am getting all kinds of good ideas on what to do next to become a better coach myself.

How do you teach to counter morote gari from distance, like a double leg wrestling take down?

So, pancake into the mat, underhook to kuzure kesa gatame and when they turn in to escape switch to kami shiho