So Much for Doing Nothing 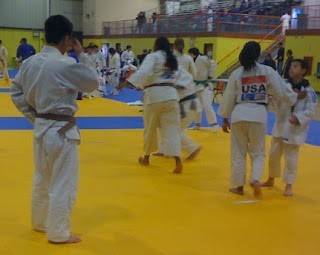 Contrary to the predictions of my family and friends, retirement has not found me with so much excess time on my hands that I have been blogging three times a day and taken to cleaning the bathroom floors with a toothbrush in a new-found role as compulsively neat housewife. Quite the opposite, this is the longest I have gone without posting in a very long time, and, as far as the bathrooms go, well, I am wondering if it is illegal to use cleaning solution to kill the fungus on the ceiling if it has evolved enough to have its own duly elected government.

So, what exactly have I been doing? First, we took a team of six athletes from the West Coast Judo Training Center to the Ocean State International. These events this year are always a bit nerve-wracking for me because we are just getting started. None of us have a lot of experience working with these particular athletes as coaches, and some of the athletes themselves don't have years of experience in judo. However, they go above and beyond every weekend. With a program barely six months old, I wasn't sure how things would go against clubs that had been around for five, ten years or more. For some of our players, this was their first trip away from home. 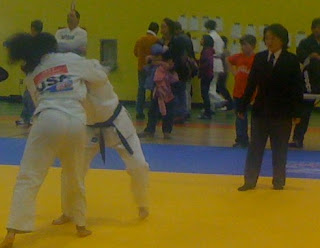 Because I am old, I would go straight to talking about the camp, which was on Monday and Tuesday, but I guess I should mention the party on Sunday night which, according to many young people, all of whom dance WAY better than me, was a great time. Gary Butts and I were there keeping an eagle-eye on our young athletes who stayed on the dance floor as far out of our sight as they could so that they could actually have as much of a good time as possible without leaving the room. We did get the chance to discuss plans for the training center which include the camp by the sea in June and, hopefully, hosting Serge's club (Mayo Quanchi) and others from the east coast at the USJA Winter Nationals in December to repay their hospitality.

Although we have been known on numerous occasions to embarrass young athletes and our own children, who are sometimes the same people, neither Gary nor I danced nor took incriminating pictures. This may be due either to our new-found maturity or to Crystal and Amber's threats to kill us in our sleep if we did.

The camp was interesting. The first day we had practice from 4 to 9 pm and there were 55-60 people, including a large team from China, a few from Ecuador, one from England, a few more from Poland and players from California, Massachusetts and, of course, Rhode Island. Although Serge doesn't usually do games at his club, he was asleep with exhaustion after all of the work of the tournament, so I abandoned my new-found maturity and we played a bunch of games that involved chasing people around the mat until you were too tired to breathe. No small children were killed although a couple of adults appeared near heart failure. Ronda, taught arm bars and gripping, while I was relegated to the under 12 group as I was judged to match them in both maturity and height. We worked on combinations, both standing combinations and combinations from standing to matwork. If you can't visualize the latter, then you should have come to camp.

The second day, we had sixteen people, one each from England, Ecuador and California, two from Massachusetts and the rest from Rhode Island. Ronda Rousey and Kayla Harrison both did a terrific job teaching their variations of o uchi gari. Ronda and I taught matwork combinations. Maturity is greatly overrated. In the test of who is most immature today, Kayla came up with a new game I hadn't seen before and Ronda and Malinda Bridges tried to tie a net over Serge while he slept. To the great disappointment of all (except maybe Serge) he woke up and caught them in the act.

Both days, Sensei Jim Hirai was in town from Seattle and graciously helped at every turn, from teaching matwork to the black belts in a special early session to helping the five-year-olds with tani otoshi and everything else in between.

A question I get asked a lot ....was I disappointed that there were only 16 the second day?

Pat Burris told me years ago that if you wanted to know who is going to win, go to a camp or clinic and at the end of the last practice, see who is still there, who went the extra mile, came to every session, didn't leave early. All of the people who come to camps and clinics show dedication above average. All of them will benefit.

Those who are at those sessions where it is dark, rainy, cold, late and a hundred other reasons not to be there after fighting two days over the weekend and working out five hours yesterday --- that group is where your gold medals are found and no minute working with them is ever wasted.

It was a great time.

The Great American Workout is at Mayo Quanchi April 26-27, with Ronda, Kayla, me, Jim Pedro, Sr., Serge Bouyssou, Garry St. Leger, Harry St. Leger, Parnel Legros and Bill Montgomery as clinicians. Show up. It will be a great time.

Oh, yeah, and when I wasn't doing judo, I wrote a presentation for a national webcast I am doing next week on culturally appropriate outreach. So much for doing nothing in retirement.
Posted by Dr. AnnMaria at 3:34 PM