Regional Training Center: I Know Why We Are Doing This Now! 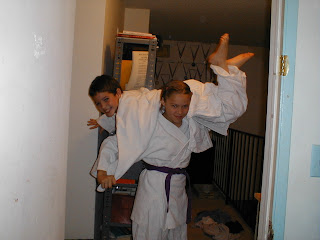 Whenever a person becomes a champion, all sorts of interesting stories surface about their early years, with one common thread, none of them are true.

For example, Ronda was NOT one of the "elite" local players when she was younger. Yesterday, a visitor to the training center commented that he had heard about her when she was 16, but this was five years after she started competing and right before she made her first U.S. team. Until that time, the only people who could pick her out of a crowd were our family friends and the people in her division she was beating.

When Ronda started judo, she was a skinny little kid who was far behind all of the other 11 and 12-year-olds who had been in judo five or six years already. She would lose in the tournaments and people would say comfortingly,

"Don't feel bad, that girl has been the national champion five times. You just started."

The picture above is Ronda at 13, holding her eight-year-old cousin, who was almost the same size. When future Olympic hopefuls were mentioned in our local development meetings, Ronda's name was never one of those brought up. Not only was she not placing in the senior nationals at age 13, I didn't even ask for an age waiver for her to compete in them.

What does this have to do with the training center? When I look at the advantages Ronda did have it was that she had me, a former world champion, training her every day. (If your response is, "You think you are so great. You are so conceited!" - go back and read the previous post on ducks. Having a world champion help you every day is a good thing. ) She also had as resources a whole group of my friends. There were terrific people like Hayward Nishioka who helped her with tactics, gripping and videotape analysis, who was always giving me DVDs and videos so I could be a better coach for her. Blinky Elizalde and Willy Pena taught her uchimata. Later, Wayne Yoshimura, gold medalist in the Police and Firemans Olympics and Brian Marks, world medalist in kata, helped her with it more. Tony Mojica taught her how to train for competition. Trace Nishiyama taught her drop seoi nage. There is a very long list. At the beginning, all of them helped her for a simple reason - I knew them and I asked them. One example really stands out. We were at a camp before the Junior U.S. Open. Ronda was a 12-year-old green belt and I saw Irwin Cohen standing by the side of the mat. I pulled her toward him and said,

"My daughter could really use some work on her grips and that's what you are really known for. Would you mind working with her on them, please?"

As I stood by the side watching, someone came up to me and said,

"I thought you didn't like Irwin. Why did you ask him to help your daughter?"

That's got to be one of the dumbest questions I was ever asked. I replied,

"She needs to work on her grips. He's one of the best people in the country for that. What the hell difference does it make whether I like him or not?!"

The fact is, I don't have a thing against Irwin personally, I like him as much as I like anyone else, but that is completely beside the point. The first time I asked for an age waiver (for those of you who don't know - this is a form asking the national governing body to waive the minimum age requirement for a specific athlete), Ronda was 14 years old and it was for her to attend the U.S. Open training camp with Pat Burris, Neil Adams and Maurice Allen. I knew each of them could help her in specific areas. If it had been someone else, Pat may have said,

"This is a fourteen-year-old purple belt who has never competed in seniors and been in judo only three years. I am sorry, this is far too much above her level."

Instead, he trusted my judgment and let her come. Much of the camp, he and Maurice Allen worked with her themselves because our "elite" national players couldn't be bothered.

What does this have to do with the training center?
If special advantages could be provided for Ronda, why not for other kids? Why could we not create a training center where athletes who really wanted to get better could come and learn, where on a weekend a kid could learn seoi nage from Joey Nawa or uchimata from Blinky Elizalde or a half-nelson from Gary Butts or juji gatame from me or tai otoshi from Carlos Mendez or sumi gaeshi from Ronda Rousey.... Why not?

I know why I am doing this. It is to give kids who want to get better another opportunity IN ADDITION to the ones they already have. It is not to take them away from their clubs and coaches but to add to what their clubs and coaches are already doing. I believe in this. See that sign when you come into the training center? It says on it,

There are people who said it could never happen. There are people who said that the USJA and USJF could never work together. But enough of us believed in it that it DID happen. There are still people every week that run down what we do. They say our facilities don't look as nice as some others (I priced the space Frank is letting us use for free - the same amount in that area rents for $1,600 a month). They say our athletes are not all brown and black belts so they are a waste of time.

Those people used to bother me. Interestingly, they never bothered Tony, Ronda or Gary, proving that my fellow coaches are all smarter than me. They don't bother me any more. I know this program will survive, be strong and grow. Because belief IS strength and we believe in this. Children shouldn't have to have a mother who was a world champion or a father who was a world team coach to have a shot at achieving their best. They shouldn't have to meet someone's definition of "good enough" to train or train with. They are good enough because they have the heart to come in and train extra days. They are good enough because they weren't willing to accept someone else's definition of them as not worth the time and effort, not one of those who are going to make it. I believe in those kids and I believe in what we are doing.

My friend, Lanny Clark, now chair of senior development for USJA, who has known me long enough to have seen both Ronda and I compete once commented,
"You know what you and your little girl have in common? When you attack, both of you have wicked intentions. You are just determined the other person is going to lose and even if you haven't the best technique or the best angle of attack you overpower them by sheer determination."

This time, we both have good intentions. We intend to keep pulling and pushing until we have the best coaches available to work with ALL of our kids and can offer opportunities to ALL athletes and coaches who want to make judo better.

If you are saying to yourself that good intentions are not enough, then you really don't know me very well.

I am reminded of the lines from Harry Potter:
Harry Potter: That even though we've got a fight ahead of us, we've got one thing that Voldemort doesn't have.
Ron Weasley: Yeah?
Harry Potter: Something worth fighting for. 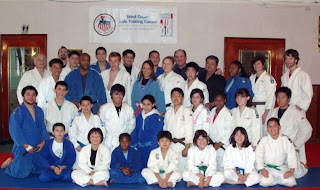 And you? What are you fighting for?
Posted by Dr. AnnMaria at 12:43 PM

AM, you are absolutely right, Too many times people don't use resources available to them becase they have a perceived "issue". It is judo it should rise above that.

Hi AnnMaria and All Judo Fans ,

I wanted to inform you about a new judo website that we've launched a few days ago: SuperJudo.TV
SuperJudo.TV is an online video show about Judo techniques & competition strategy. The show is hosted by two time Olympian Sensei Leo White and is filmed in High Definition. Please stop by to check out our videos and feel free to leave a comment or a question. See you there.