Japanese Judo Isn't Quite as Japanese as Generally Believed 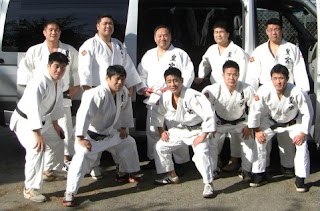 When people complain about judo players in America that "don't follow the traditions of judo as taught in Japan", I wonder to which Japan they are referring. Last night, I watched the 70 kg matches from the 2004 Olympics. Easily, the most physical, aggressive player in the tournament was Masae Ueno, the eventual gold medalist. She ripped out of grips, dragged her opponents around and when she knocked an opponent down, she JUMPED on her. Watching these matches just reinforced for me that the biggest weakness in the workouts of most Americans is a lack of intensity.I am happy to see that many people, at least around southern California, are starting to take that to heart. Not only are more people coming to the training center, but they are also going to other clubs like Tenri, Mojica's or Hayastan to get in extra practices with more challenging players.

Some of the same people who will argue against teaching gripping or matwork because, "I believe in a more traditional Japanese judo" don't seem to believe in the part about training every day and doing an hour of randori every practice.

The truth is that the stereotype of "Japanese judo players" doesn't fit every judo player in Japan any better than any stereotype ever describes a whole group.

Here is one accurate perception of Japan, though. There are more people doing judo and, on the average, their competitors train more hours a week than ours do. Even the people on the Waseda University team who were not the most gung ho trained at least five days a week AT JUDO.

A second positive trend I see around the country is people seeking out not just more intensive practices, but simply more hours of practice as well. It is finally starting to sink in with more and more people that you can't be an international competitor training four hours a week. Over the next few years, we may see a change in perception of who "the good clubs" are. Until recently, if you trained five or six days a week, that in itself brought your players above the crowd. Now that more competitors are going that route, even if they need to practice at two or three clubs, expect to see players from a lot more clubs placing at the national level. And that is a good thing.

Not everyone will come to the training center. Some people don't like our style of coaching and some people plain don't like us. (It is a false rumor that I asked a member of the LAPD to be on our coaching staff just in case someone decides to come in and shoot me in the back. Actually, I asked him because I believe he is a good coach, but, hey, if you have to have somebody watch your back, having someone armed with a deadly weapon is not a bad first choice.)

Wherever people get in their extra practices, whatever pushes them harder, it is a good thing. Enough of that and we may start seeing American players beat the Masae Uenos of the world. It just might happen sooner than you think.

---------- REQUIRED JUDO TIP -----------------------
I stole this one from Gerry Lafon. Don't imitate how the champions train. Imitate how they trained when they were your age or at your level. The most extreme example of this is people who begin judo and want to randori all the time because "that is what the champions do". I guarantee you that those people you are imitating spent years learning technique, doing drills AND randori to get to the level where they are now.

Have patience. I often get asked how my daughter Julia, who turned 10 today, compares to her big sister, Ronda, at the same age. I always tell them that Julia is way better, since Ronda hadn't even started judo at that age. Right now, I am trying to teach Julia to get her feet in the right place when she does a throw, when to pull up on an entry, to follow up into matwork and to not become another statistic in the epidemic of childhood obesity.

Build a solid base of techniques. Maybe if you build a base of technique and don't drive your ten-year-old to compete every weekend of the year, you won't take home first place from every local tournament. Maybe if you drill and drill your youngster on drop seoi or a running leg pick, you will coach the national champion in the 7-8 year old division this year. However, what usually happens is that within a couple of years, the other children have learned to avoid your player's one technique and without having developed the kind of work ethic one gets from doing a difficult task without an immediate payback, your player is ill-prepared to begin building a broader repertoire. There were a half-dozen girls that beat Ronda her first couple of years in judo. All of them quit a long time ago.

Maybe Julia will become a national champion some day and maybe she won't. I don't know. What I do know is that, whatever happens, she will look back on the time she spent on the mat as a generally good part of her childhood. Eventually, she will learn a substantial amount of judo. After watching me work with my daughter last month, another coach suggested helpfully,

"That's okay, she's not going to be a little kid her whole life."

Train for the long-term, because that's where you're going to spend most of your life.
Posted by Dr. AnnMaria at 9:58 PM

Hello, I really look forward to reading your blog each day I really learn a lot. One of my high school boys is looking for a long Judo camp to spend time at this summer do you have any ideas where we could check to find such a place?

There are several camps that are really good. It depends on how competitive he is and how far he wants to travel. Camp Bushido is a fun camp. It is a week long, he will meet a lot of people and have a good time. It is not super-serious competitors but the people who teach there are always credible coaches who know their stuff. If he is from a small town and hasn't won any national medals yet, he might feel comfortable there.

I believe there will be a camp in Los Angeles at the West Coast Training Center for four days in June. We are working out details now. Unlike Camp Bushido, we don't have housing but I am sure we could find a family for him to stay with.

Serge Bouyssou does a three week camp in June and the beginning of July. It is good for competitors and the kids have a lot of fun. They do provide housing. It is in Rhode Island.

There is also a camp after the USJA Junior Nationals in Boston. Again, housing is not provided but there will be plenty of people there so finding someone to share a hotel room with should be no problem.

There is a training camp in Toronto July 7-11. Again, it is for serious competitors. There is housing and the USJA is sending a team.

This month's issue of Growing Judo has information on several camps, including those above. It should be out soon.

I have had that experience so many times in the gym, training myself or my clients...

Your words on appropriate training for the athlete (and their CURRENT level) are so true!