THE REPORTS OF THE DEATH OF JUDO HAVE BEEN GREATLY EXAGGERATED

Among certain crowds, it is a hobby to get together and talk about how judo is going downhill, this new generation has no work ethic, parents can’t be bothered to drive their kids to practice, etc. etc. Stop right there. As much as I hate to distract someone in mid-rant by throwing in facts, it seems that every picture we received for this month's issue of Growing Judo had a large group of judo players, from the training center practice on the front cover to the West Point team traveling to Japan to the clinic in Denver with USJA mini-camp coordinator Paul Nogaki. This month isn’t the first time I had to leave out some of the many events on which we received notification. Not wanting to send you all a 64-page magazine to download, I had to restrict what was included to only events that would draw a regional or national audience. I apologize if your event was left out. 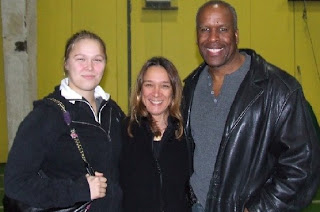 Stop again. Think about the really great people you get to know in judo. I must admit to being as guilty as anyone as focusing on the people who seem to do all the wrong things for the wrong reasons. We have to stop that and remember the terrific people we meet in judo, like Willie Williams, one of the founders of the Connecticut Judo League, who I finally got to meet in person at the Ocean State. Like Ronda, who even though she is training for the Olympics took two days out to come coach our team from the West Coast Judo Training Center and another two days to help with the training camp afterwards, along with her teammate, Kayla Harrison (anyone who took pictures, please send for the next issue).
In this issue you will find an invitation to apply for a junior training camp in Toronto, Canada. You will have the opportunity to train for five days with 300 athletes from the U.S. and Canada. There is an announcement of a camp overlooking the ocean in Carlsbad, California, another with Doug Tono in Chicago. Doug is one of the most modest guys I know. Before he settled down and became the director of the USJF Nationals and a kata judge he was winning international gold medals including in the Dutch Open and U.S. Open. He’d never tell you that, so I just did. Serge Bouyssou is running a three-week camp in Rhode Island. The camp in North Carolina has European stand-outs Nick Lowe and Neil Adams, former world champion. The Liberty Bell is coming up – always a huge tournament. Reserve June 29-30 for judo. Jimmy Pedro, Jr., tournament director of our own USJA Junior Nationals, held June 29-30 in Boston, will also be running a camp in the week after that tournament. Mitchell Palacio and the folks in northern California are bringing back the national brown belt championships and this time they have added a novice division. It is ages 15 and up, also on June 29-30 in San Francisco. READ THIS MONTH’S ISSUE CAREFULLY. Not only will you get some great ideas about coaching, teaching and competing, not only will you learn what clubs are doing around the country, but you will also see a LOT of opportunities for you to learn, compete and generally have a good time.
Oh, speaking of people to remember – THANK YOU to Bob Treat of Southside Dojo who donated $700 to the USJA Development Fund this month! Through the generosity of our wonderful donors like Bob, we can afford our outreach program that includes: Tony Comfort, who represented the U.S. in the 2004 Paris World Cup and was in the 2004 Olympic Trials will be doing a clinic in Mississippi in June, part of the re-introduction of judo in the Mississippi State Games. Thanks so much to Keith Worshaim for making this happen. We are also providing our regional coordinators with issues of Koka Kids magazine to help with their events. Roy Hash, Grass Roots Development Chair. is doing a judo demonstration in Texas and giving the magazines to the junior players as a “thank you” for helping with the demonstration. Joan Love, New England coordinator is giving these as door prizes to junior players who attend the Great American Workout in Rhode Island. The USJA office has a limited number of editions left. If you have an idea for an outreach event, contact your regional coordinator. Don’t know who that is? Look here:
http://www.usja-judo.org/committees/development/regional.html

In case you are wondering, yes, this IS my editorial for the March issue of Growing Judo, which is now in the hands of the ever-wonderful Adam Stevenson of Wisconsin who proof-reads, spell-checks, edits, lays out, revises and generally keeps the magazine from looking like it was put together by mentally-challenged monkeys. Even better, if it doesn't get out by March it will now be his fault and not mine! You can't ask more than that from a person.

There really are so many people who are helping the USJA and judo in general, I think my next blog will be on all of the people, by name, in alphabetical order, who have helped out the USJA, the development program and me or my daughters as individuals. I may write one after that devoted to the people who piss me off, but I might need to drink some more cognac first.
Posted by Dr. AnnMaria at 12:22 AM