Judo Blogs for Parents and other random thoughts 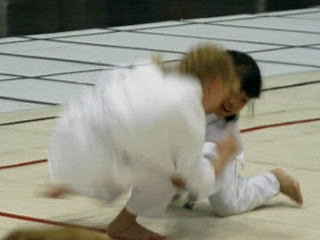 We interrupt this discussion on elite athletes to bring you this information on children.

I feel the need to pause in talking about training plans for developing elite athletes to discuss the needs of children. This is because, inevitably, when I start describing what I believe an athlete needs to move to the next level someone will show up with their five- or six- or eight-year-old and want me to whip him or her into shape.

Guess what? I don't believe in whipping a child into anything. Tomorrow we have the Nanka judo games for children 13 and younger. They will do as many throws as they can in one minute, be scored on technique for their best ten throws, compete in other all around judo skills and play games ranging from freeze tag to toilet ball. What? You've never played toilet ball? You'd better show up at the training center at 11. (In case you don't know, the address is 123 S. 1st St., La Puente, CA. I know that sounds like an address we made up, like the 555-1234 phone numbers you see in TV shows, but that in fact really is the address.)

If you'd like more information on judo for children, I'd recommend the Judo4parents site. It answers questions from, "How are most judo clubs organized?" to "What's all this bowing about?"

The world according to Laurie has quite a bit on judo, including several posts on children.

If you are interested in games for children (and for adults who don't take themselves too seriously), check out the games page on the USJA Resources site, a service of the USJA Development Committee. You can see movies of these games in practice, thanks to the inimitable James Wall.

While not focused particularly on children, Patrick Parker's blog on judo and aikido is interesting read for those who would like a kinder, gentler and less competitive take on judo than my own.

Speaking of my views, I am trying to figure out where I was going with these notes I found cleaning up my desk the other day. I have reproduced them here faithfully.

I am not sure where I was going with this that I ended up on the last point ...

Speaking of which, those of you who have been spreading the rumor that, during my competitive days, that I often killed my opponents and ate their bleeding hearts in front of the referees, cut it out. It is not true. There were rules against that sort of thing, even back in those days. I believe they gave you a shido.
Posted by Dr. AnnMaria at 10:21 PM

Women are better at some things, men at others. Moves that take more flexibility, e.g., that switching hips counter to hip throws, is done much more often in the women's division.

Not every move in judo starts from the hips. We were doing ude garami today. It starts by me having my weight on your chest, putting my elbow against your ear and grabbing your wrist. Then I grab my own wrist and crank your elbow. Not much hips involved.

But in throwing moves do you think it's all hips?
Don't you think we have a more stable basis because of wider hips?

I'm very amazed on how you were able to do many things at once without dropping your commitment to judo. Teaching,consulting, surveys etc.

Do you owe this to the fact that you are a woman? because there's a theory that men can't do two or more things at the same time.

I love your blog!! I want your advice. I am 41 yrs old and still love judo. But I cannot make big forward throws as well as in the past. I want to learn from the best on foot sweeps. do you have any recommendations on who is very knowlegable where I could get some private one on one training? my current sensei is leaving the area and I desperately want some pearls on this misunderstood area of judo.